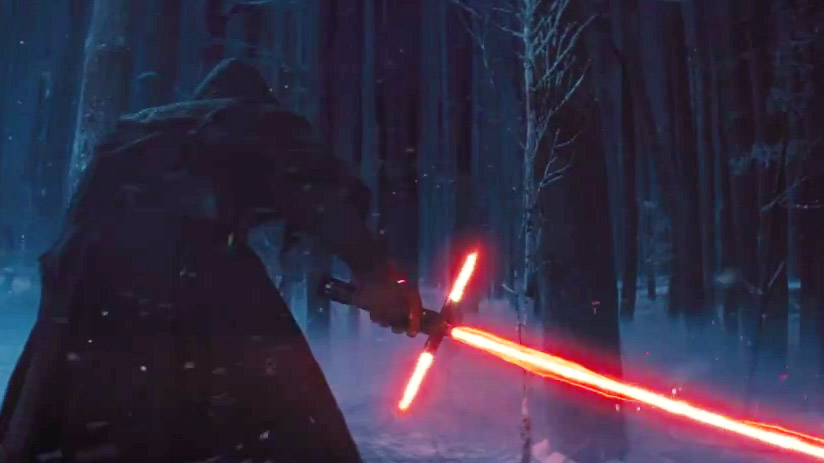 “There’s been an awakening.
Have you felt it?
The Dark Side.
And the Light.”

Today was the day. The new Star Wars teaser trailer! At first I thought it was only going to be shown in select theaters for the weekend, then go nationwide – then go online. I’m glad I was wrong when I read that it was going to be released within iTunes trailers today. I refreshed and refreshed that page, and while it is there now, it wasn’t showing up for me on the site. Luckily I saw there was a link on twitter to a YouTube video. I clicked on it, and once I saw that it was posted by the “Star Wars” user I knew it had to be real. So I watched it. And watched it again. And then watched it again.

Oh wait, are you one of the few people who actually haven’t seen it yet? No, I am sure you have – but what the hell, watch it again!

Okay, you can watch it again. I’ll wait.

Good now? Yeah, feel free to go back a few more times and watch it again. It doesn’t show much – but what it shows is pretty force-tastic.

Let me preface this by saying I love Star Wars – but I’m not an expert. I haven’t read any other articles on the trailer yet, so these are just my guesses and opinions – and if I get anything wrong, or don’t know something that might be part of the expanded universe that more hardcore fans know…oops.

Right, so – where were we? Oh I remember – Let’s discuss…

The trailer opens up with an empty desert landscape. The first thing I am thinking is that it is a desert planet, which makes me thik that maybe this is Tatooine? We see a young man in a classic, white Stormtrooper armor without a helmet on. This is actor John Boyega, a British actor who was recently part of Fox Television’s “24” reboot and was also in 2011’s Attack the Block.

When I realize that we are seeing a Stormtrooper without his helmet on, looking tired, sweaty, and scared – I tend to think I am not looking at an actual Stormtrooper. We have seen the “good guys” dressing up as Stormtroopers before…

And if that method of infiltrating the enemy has worked before – well, those who have done will probably suggest they try it again!

Next we see the first of what I am sure will be many future toys. This looks like a cool, updated R2 unit that moves a little faster than the D2 model (but that model is a classic, and I sure still gets used by them there old timers…)

At first glance, it looks like he (I’ve just gone ahead and assumed it’s a “he”) is also one some sort of desert area. Same planet as Stormtrooper John? Maybe?

While the picture above shows the young man in a hilly/sandy desert, this R2 unit looks like he’s in a flatter, more populated area – and maybe it’s a scrap heap or metal yard?

Real Stormtroopers! Here we see a bunch of the masked baddies, standing in formation on some sort of transport.

They guys all have their Imperial Blasters, probably an updated version of the original .

And wherever it is they’re going – it’s night and it’s time for a battle.

This looks like actress Daisy Ridley. I say that because her pic on IMDB looks pretty much the same, not because I know her from anything – but all that is going to change soon.

Ms. Ridley appears (in my opinion) to be on the same planet as the R2 unit – so perhaps the same as our fake little Stormtrooper too. Maybe looks to be in a hurry well.

I think this, the R2 unit, the fake Stormtrooper, and something we’ll see at the end of the teaser, might all be part of the same section/mission. A rescue mission perhaps?

We then jump to this serious looking fella. I see that uniform, I think one thing….

And yes we have a few – probably more than a few – flying very low over a body of water on a planet that is NOT a desert – and has mountains. This could be anywhere as far as I know.

It then cuts to this fella walking through some snow. He’s in a robe and he looks determined. Is he good? Is he bad?

Oh he’s bad alright, at least that’s what the red light saber is leading me to believe – and how bad ass is that “cross saber!?”

Also the voice over of “The Dark Side” helps…

The light! There it is. After decades of waiting, we are going to finally see the Millennium Falcon. This thing shoots out across my screen and the epic score kicks in.

The Millennium Falcon swoops and flies through the sky (fantastic visual effects by the way).

And it looks like it may be on that same desert planet again. Could it be there for the girl? And the young, fake (in my opinion) Stormtrooper?

Wherever it is going – it is doing so under fire from a couple Tie Fighters. But of course, if a certain smuggler and his furry companion are flying the ship, I am sure they’ll be just fine….

In this trailer that was less than a minute and a half, we saw Stormtroopers, an R2, X-Wing Fighters, Tie Fighters, The Frigging Millennium Falcon, and probably some kind’ve Sith. And I’m guessing we also saw two of our heroes.

All-in-all I thought this teaser was amazing. It made me both psyched for the future, while bringing up just enough of the past to give this late-30’s nerd chills.

I Can’t Stop Listening to That New Faith No More Song!
Looks like It’s Official – Jared Leto Is The Joker
To Top