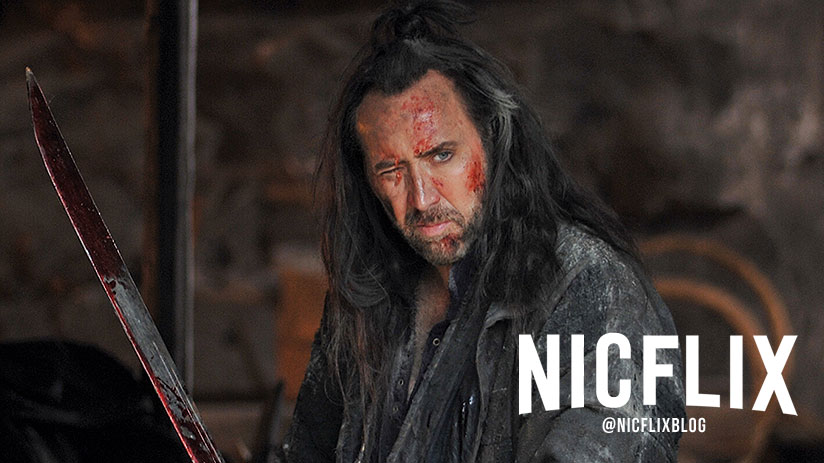 Imagine started a blog where you want to watch and talk only about Nicolas Cage movies that are on Netflix. Now imagine that you have this idea, start this blog, then look for the first excuse to get somebody else to add to it.

Hi, I’m that somebody else.

See, my cousin Brandon came up with the idea and I love it. In September, he posted his first NicFlix entry for Left Behind. Then…crickets. Silence. Apparently some people DO have more important things to do. Then one day I find myself in a head-to-head battle of Fantasy Football with this coward hiding in Brooklyn. The winner gets bragging rights – but to make it more interesting, he says that the loser has to post the next NicFlix post.

Yes, you have that right – if you are reading this – you are essentially reading a punishment. And you know what, after watching the movie I just watched – it’s rather fitting. I watched the 2014 Nicolas Cage epic – Outcast.

I actually started jotting down notes that I was going to use to flush out a blog post – but you know what, screw that. I’m just going to give you my notes as is. I took these as if I was almost live tweeting it, but to do that – people would need to care about this.

Who knew that Nic Cage made this movie in 2014? Nobody, that’s who.

One whole star on Netflix

I wonder how much Nic is even in this. He’s all over the netflix screen shots.

Looks like a SyFy Original trying to make the most out of a small budget.

MIdeaval. You know, knights and shit.

Some sort of slaughter. I see Cage.

Nic has some weird accent.

It’s nice that Brandon comes up with an idea and is already doing his best to pawn it off on somebody else.

This effin guy was nominated for an Oscar. He CAN act.

This guy is not Ryan Phillipe right?

Seems like they’re British or something – battling a Middle East kingdom, but Nic Cage doesn’t want to do that. He wants to move on – to the east.

This is really just the opening I assume.

And that just ends.

Some Asian king is getting old and dying. He picked his son to take over for him. The kid’s afraid no one will follow him over his brother, who is a great warrior.

I’m not even sure these actors in the family are all of the same Asian descent. One kid looks Samoan.

Some sort of Army approaches. I assume these are all the Middle East actors just in different clothes.

Oh it looks like the army is led by the other brother. The warrior brother. And he’s pissed he’s not getting the crown.

Am I really only 13 minutes in?

The other son is the bad guy. Forcing his way to the thrown.

I assume the younger son gets ol’ Nic Cage to help him? So the beginning of this movie was just useless.

There’s a seal that the younger brother has. The older one is looking for it. I guess that decides who is king? I’m paying half attention. I chose this movie because Nic Cage looked like a Samurai.

Now he’s telling the guards that the other brother killed the king and stole the royal seal.

Did he just say Summon General Gau? I f’n love that chicken.

I think I’m watching a foreign film, but in English with a “Hollywood star” attached to it for financing reasons.

Okay so the sister split off from the little brother, who now needs to – I dunno, do something so it’s actually king.

And now we’re in a bar where in the back a mysterious man is chilling out. The princess comes in (the sister) seeking an escort for the road. I bet I know who will be the escort.

The mysterious white man in the back is looking on.

Eh, it’s not Nic Cage? It’s that Ryan Phillepe dude from the beginning – I think.

He tries to interfere, but the guards pee on him and try to kill him. He’s drunk but takes them all out.

Now they want him to be the escort, but he doesnt see interested.

Where the fuck is Nic Cage?

No now Ryan Fakeppe – is he the Outcast? He’s off on his own having flashbacks of the opening battle. I guess he’s moved on since then. He’s thinking about all those people he slaughtered – and then all of a sudden he’s with the brother/sister and helping them.

The director is more known as a stunt coordinator than director.

The three of them stumble upon a village being slaughtered – by the guards looking for the prince/princess.

The guy makes an unreal arrow shot to take down a guard. How is that possible? Are they teasing that he has some special powers?

If anybody has powers in this movie it better be goddamn Nic Cage – and where the shit is he anyway?

Half hour in and he’s only been in the beginning.

They take in a survivor of the attack so now they are a group of four instead of the three that the guards are seeking.

Oh back to the bad guy and General Gau. They’re going over how lil brother stole the seal and something blah blah blah – go screw Brandon.

Okay, I just looked up IMDB and my mind is blown away – this Ryan Phillape guy is actually muther-fuckin Hayden Christensen – Anakin Skywalker himself?

So it’s been a week and I still haven’t finished this movie – but this shit needs to end tonight. Ok, where was I….

Now they’re part of some caravan and staying at some sort of…WHERE THE FUCK IS NIC CAGE!!!!

I think Anakin Skywalker – that is how will now and forever refer to him – might be a drunk. I thought before he had magic powers, but I think his magic power is drinking..

Oh wait, I guess he’s been drugged. The lady who invited him to the caravan drugged him. Still not sure how Nic Cage becomes a Saumari and saves them all, but there’s only one way to find out.

You know, if I didn’t watch the rest of this – nobody would know. I highly doubt anybody is ever going to read this. If you are still reading this, please tweet @nicflixblog with the hashtag #KaratePants.

Oh no! They’ve been betrayed by the caravan. Trying to sell out the girl and her brother. Luckily Anakin get them out in time. Oh right, there’s a fourth in their group. Well 3rd now that Anakin has stayed back to fight.

I bet this is when we see Nic Cage. Maybe to help him when he gets outmatched? Oh he’s gone and gotten his ass kicked. Oh wait, no, he’s got the upperhand again.

He’s killing and fighting – a lot harder when they’re not defenseless Jedi children isn’t it you bastard!

I think I just saw a man with the head of an egg.

Okay, back to the kids. They’re on a river now but some of the bad guys are after them. And now Anakin swam out to a boat and I guess he’s going after them too.

Oh no the bad guys are catching up. Please Nicolas Cage! Please Help Them!!!!

Wait – where are those arrows coming from? Who is taking out the bad guys!? Could it be? Oh wait no, Nic Cage is not Asian. DAMMIT. Maybe they work for Cage? Not gonna lie, this segment was pretty cool. I guess there are a group of good guys.

Oh man, back on the boat Anakin is hurting – but looks like he reached the other boats. I hope he collapses and a blurry figure comes and saves him…And it’s Nic Cage himself. Hmm, blurry people….too many….

And now Anakin is in a tent or cabin or building or something, all stitched up and – wait WHO IS THAT BLURRY FIGURE! He looks like a Samari! He’s holding a snake and he’s coming closer……

Almost 55 minutes later (minutes maybe a 5 second moment) he’s back. Is he a snake charmer now? Nic is not happy to see Anakin. He saved him, but as soon as he can move he wants him gone.

Looks like Cage is known – known as “The White Ghost”

I can’t believe this guy won an Oscar. Jesus Christmas….

I don’t think I want to do this anymore. I’m just going to keep watching and get through this as quickly as possible.

Maybe I’ll comment if something arises, but really I should just be a good prisoner, keep my head down, my mouth shut, and serve the rest of my time – which is now 33 minutes.

Anakin is an opium addict. Turns out THAT is his superpower.

I’m not looking forward to what Netflix recommends to me after this becomes part of my viewing history.

Screw you and your terrible idea Brandon. 29 minutes.

There is some slight Ragin Cage during a scene where he’s drunk.

Whoa Anakin is making out with the princess. I would’ve thought she was a lil too young for him. Turns out the actual actors are only 6 years apart.

In this bad movie, the love story is more believable then the one Anakin had with The Black Swan in the Clone Wars.

It looks like Cage and Anakin have made up, so he might help them. The bad guys are heading their way. Shit is going to go down. And more importantly, there are only 24 minutes left.

Cage and his people, along with Anakin Skywalker, are set to take on the black guards. Wait – do i all of a sudden care?

I’m about to eat a yogurt, that should take about 5 minutes up, right? 19 minutes.

Uh oh Nic Cage’s wife is blown up. That’s what you get for helping…

There are dozens are guards and but one Nicolas Cage. The odds do not look…oh he just got stabbed in the guy…but he fights on!

Stabbed. He Fights on! He has Gene Simmons hair I just noticed. Old Gene, not what he has now. Oh wait.

I with there was a rule that said once Nicolas Cage’s character was killed off you could stop watching the movie. 15 minutes left.

Uh-oh all the bad guys are here now. I bet the guards turn on the bad son and follow the king. Shit I sound like I care.

I think General Gau is a good guy! As well as being delicious.

The sister tried to stab bad son, but Bad Son killed her – and that spawned Anakin to get some strength and kill the hell out of Bad Son while the guards watch. 10 minutes.

Wait I thought I was going to stop taking notes.

Oh the girl is alive!

And all the guards are bowing to the boy king!

Anakin has buried Nic Cage – but you can’t kill what doesn’t die! (cage i mean, not the character – cuz he still dead)

And then Anakin rides off? Why not stay and enjoy life? Oh wait – is he dead? Wsa that just a vision of him!? Oh no, I bet the graves are Nic and his wife. Why wouldn’t it be?

As it turns out – there actually may be a sequel made – but with Cage dead and gone, I’ll never have to watch it – unless we make a Hayden Christensen blog.