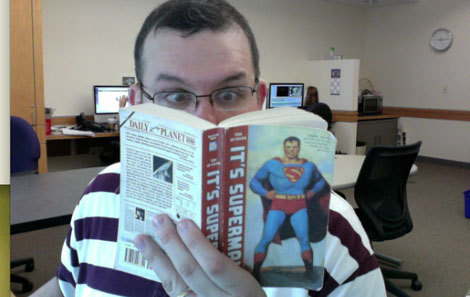 Can you believe that we’re only 3 days away from the final Smallville? I’ve already taken the day off from work and made sure my wife knows that it’s all-Superman all-day (yes I actually got somebody to marry me 11 years ago, I can’t believe it either).

I have my All-Star Superman DVD that I have saved for this day – a DVD I won in a contest on The Atomic Geeks podcast. Then I’ll be switching over to Netflix streaming on my Roku to watch Superman: The Movie, Superman II, Justice League: Crisis on Two Earths, and whatever other Superman related things I can find.

Finally, around 6:30pm my buddy Dave is coming by. We’re going to gorge on some pizza and fire up the pilot episode before settling in and experiencing Finale.

All together, I think that makes for a pretty good Superman-filled “Smallville Day” – but it’s not just one day. I’ve already started early.

I am reading “It’s Superman” by Tom de Haven to get me in the mood. It’s another “What if” tale of Superman that brings him into the “real world” of the 1930s. At least that’s what I think it is so far – since NYC has been featured but there is no talk of Metropolis. And at this point Clark is still in Smallville as a teenage and Lois is a 19 city girl.

But no matter the decade or the story, when I am picture those two characters now and forever, I’ll be picturing Tom Welling and Erica Durance.

Also, I own three Superman shirts. One I wore yesterday. One I wear tomorrow. And one I am saving….

Until Friday, stay Super my friends….