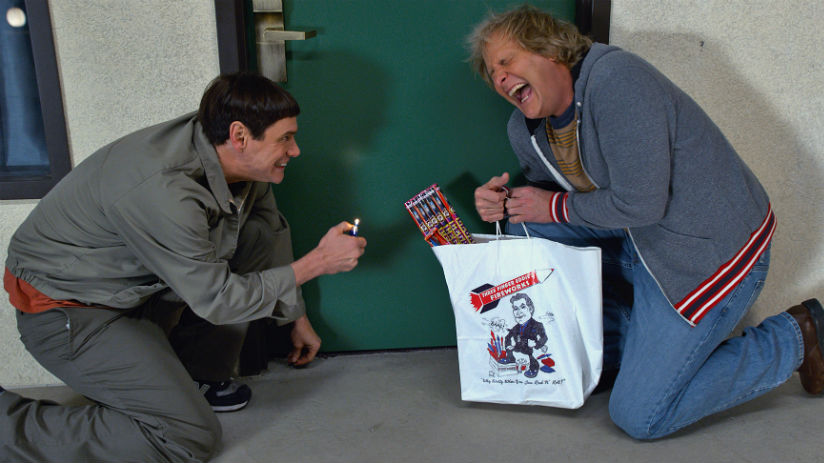 In December 1994, I was dating my girlfriend (now wife) for over a year, I was finishing up my first semester at college, and I was going to the movie theater to see a little movie called Dumb & Dumber.

This movie became an instant classic between me and my friends, a movie you could watch over and over and still find new things to laugh at.

Twenty years have past – twenty years – and we are finally getting an actual, real sequel to the original. Same writers, same directors, same stars.

I wish I could say that I loved this movie. I kept telling myself that I was going to love this movie no matter what. When I first saw the trailer, and a bit of skepticism crept into my brain, I said I don’t care I’m still going to love it. When I checked Rotten Tomatoes, and saw that it had only scored a 44%, I thought – there aren’t that many reviews here yet. Who cares I’m going to love it.

What do I care about what some critics say? This movie is supposed to be stupid, silly, and just make me laugh. No matter what, I’m going to love it.

I didn’t love it.

Something just didn’t feel right to almost immediately. Maybe it was me? Maybe it was because the theater we watched it in wasn’t very crowded (I was surprised our local theater had 3 screenings of it today when it opens tomorrow). Early on in the movie, it felt very quiet in the theater – too quiet, almost awkward feeling. We were watching stuff happen on the screen, but nobody was laughing or reacting – including me.

Laughs did come – and I did laugh loudly plenty of times. How could you not? No matter what, Jim Carrey and Jeff Daniels are still two talented actors who know how to be stupid and silly. And there was an abundance of stupid and silly.

Maybe it’s the Farrelly Brothers? I don’t think their script was as funny as it could have been. I don’t want to blame the actors, or the fact that they and their dumb characters are 20 years older – I just think they weren’t given the best story to start with.

That being said, I did laugh. There were some very funny gags, and some great reactions from Jim Carrey’s Lloyd Christmas.

Oh, and last time I checked that Rotten Tomatoes score has dropped down to a 25% which just breaks my heart.

I’m not even sure if we liked it.

Guardians of the Galaxy Was Friggin’ Awesome!
Best Movies Ever: The Goonies
To Top