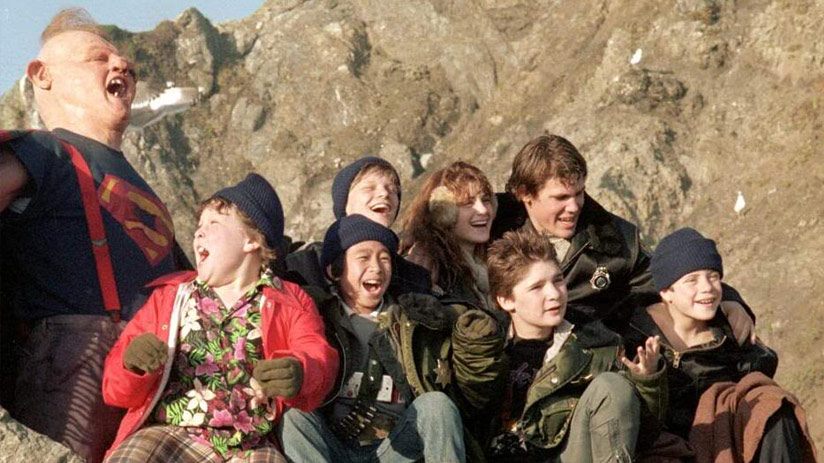 As the first entry to Best Movies Ever, I choose one of my favorite movies of all time, the 1986 comedy/adventure, The Goonies.

I was 10 years old when The Goonies came out and I remember that I went to see it in the theaters with my brother and a couple of my friends.

But to me, my love of the Goonies really came with over the years as it played on cable television . There really is nothing like accidentally coming across one of your favorite films when you’re not expecting it – and whenever Goonies is on I never have the heart to change the channel. In fact as I am typing this – it’s on ABC Family right now.

Why do I love it so? Probably because it reminds me of being a kid and going on bike rides and not having a care in the world.

Of course these kids from the Goon-docks did have a worry – that they would lose all their homes and have to move away – and lose each other.

But, instead of just sitting around and letting the adults deal with the problem, they took matters into their own hands and went on an adventure of a lifetime.

I’ve found that over the years that I really enjoy movies in which there are a group of kids having adventures or just – being kids.

From Stand by Me to The Monster Squad, Bad News Bears to the Sandlot, it’s kids being kids without really being a kids movie that talks down to kids.

And that is the most times I’ve ever used “kids” in a sentence.

I remember fantasizing for years that my friends would go on an adventure like the Goonies – or at least something close to it without the criminals chasing us and trying to beat us to a pirate’s treasure – although that would be awesome.

They don’t make movies like this anymore, and if they did it would be all in CGI and probably in 3D. And there would never be a scene with Mouth translating for Rosalita. Still one of Corey Feldman’s greatest moments.

Back in 2001, the DVD came out and with it a whole bunch of extras including a DVD Commentary with the cast and director – Richard Donner (Lethal Weapon 1-4, Superman) – and it was one of the coolest movie things I’ve ever seen.

Nowawadays, almost every movie has some kind of commentary on it when it comes out on DVD. It’s part of the movie making process today. But, to get a commentary on a movie 15 years after it was released with all of the cast, to hear insight on a childhood favorite that you never thought you were going to get – that is truly special for movie buffs.

Being that I loved this movie so much growing up, I wanted more. I wanted to see further adventures with all my favorite characters. I wanted a sequel.

And then there was Goonies II.

Oh, come on, you know about Goonies II right? Never saw the movie? That’s because it wasn’t a movie.

A year after the movie came out, Konami released Goonies II for the Nintendo Entertainment System. I never played it. I’ve never actually seen it in person. All I know is that it was a “sequel” to a Goonies arcade game, hence the “II” in the title – but not the sequel that I or any other true Goonies fan were hoping for.

Of course, there have been talks about a real Goonies 2 for years. I remember hearing about in 2007 – only to hear in 2008 Richard Donner say that it was a no-go. Since that time I’ve heard the movie is on and off multiple times – the most recently, from only about 9 months ago, being that the movie is in development.

Will it happen, who knows – but you can never say never nowadays.

And remember…Goonies never say die, do they?

I Really, Really Wanted To Love Dumb and Dumber To…
@GeekMentality’s 2015 Oscar Guesses
To Top