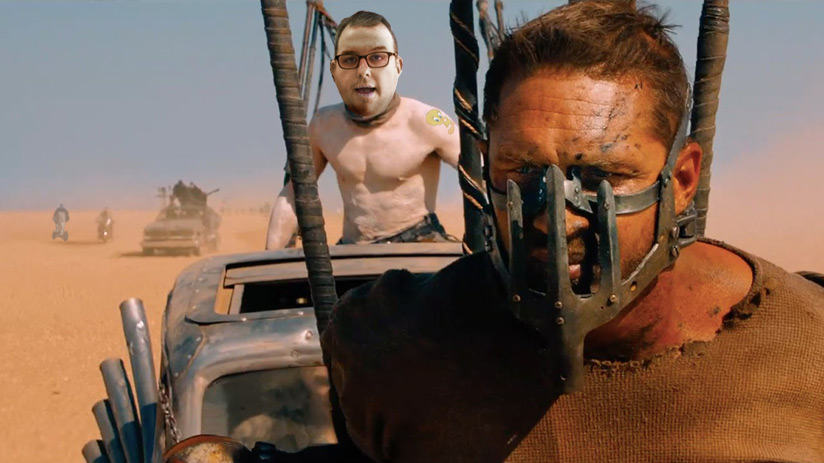 I think I first became aware of Tom Hardy in 2010’s Inception and he really became more of a household name (at least in my household) in Christopher Nolan’s final Batman film, The Dark Knight Rises (not realizing that I did see him as far back as Star Trek: Nemesis).

Mad Max, on the other hand, was a character and set of movies that I’ve been aware of since I was a little kid. I can’t tell you if I’ve seen all of them – and if I did – I don’t remember much. I remember for a fact seeing Mad Max Beyond Thunderdome, and loving Tina Turner’s anthem. I was 10 at the time.

So it’s been a while.

I remember hearing for years that Mad Max was going to come back in a new movie. For a while, there was still talks of Mel Gibson returning to the role. Luckily enough time had passed by, and that became less and less of a viable option.

When Tom Hardy was named the new Mad Max, I thought it was a good choice, but I didn’t really care. The character and story weren’t something I cherished really. I liked it, but it just seemed like another reboot.

Tonight’s feature film, day three in FNE Movie Month, is the 2015 (yes I went out to the theater to see this one) action film Mad Max: Fury Road.

This wasn’t just some run-of-the-mill reboot/remake where the studio just plugs in some generic director (Tobe Hooper directed the original Poltergeist. Do you know who directed the remake? Me neither.) and says “go make us a movie.”

This movie was directed by none other than George Miller himself. Before he directed a talking big or a dancing penguin, this native Australian wrote and directed all three of the original Mad Max movies.

He created Mad Max. It was his baby. And now he was back for more – and more is what he got.

If George Miller can do one thing, it’s direct the hell out of action/chase sequences. The original films had some great action, and with modern technology and a much larger budget, he was able to create breathtaking action sequences that had me smiling almost the entire time.

I say almost, because there were a few times I jumped out of the way. The 3-D was pretty effective.

My brother got up to go to the bathroom a couple times (beer will do that to a man), and afterwards he was wondering if he missed any key detail in the story. He didn’t.

And the story really didn’t matter as far as I’m concerned. It was fairly basic. A woman is helping a group of young women escape an evil power hungry warlord (or overlord? I’m not sure, but he was some sort of lord) who uses them to give him children.

They chase after them.

I don’t want to give any more away, and I don’t want to sound like I am oversimplifying things, but really the “story” part of this movie was there to give us an excuse for some kick-ass, crazy, high speed, action chase sequences.

I know there must’ve been a lot of digital work in this movie. Digital effects have come a really long way, but what I like is that a lot of the stuff we were looking at was actually happening. Sure it may have been polished a bit with effect, but (unless digital effects are even better than I imagine) these were real stunt guys and gals doing some really amazing stuff.

If you have a chance to see this in the theater, I suggest you do. This is definitely one you want to see on the big screen, and the 3-D is worth it if you don’t mind wearing glasses (or in my case, glasses over glasses) for a couple hours. It always takes a few minutes to get used to the 3-D, but once you do, you forget about it and just feel like it’s part of the movie.

If you have no idea who Mad Max is, it doesn’t matter. All that matters is that this movie is great fun and I really did have a smile on my face almost every second of the movie. Well done.