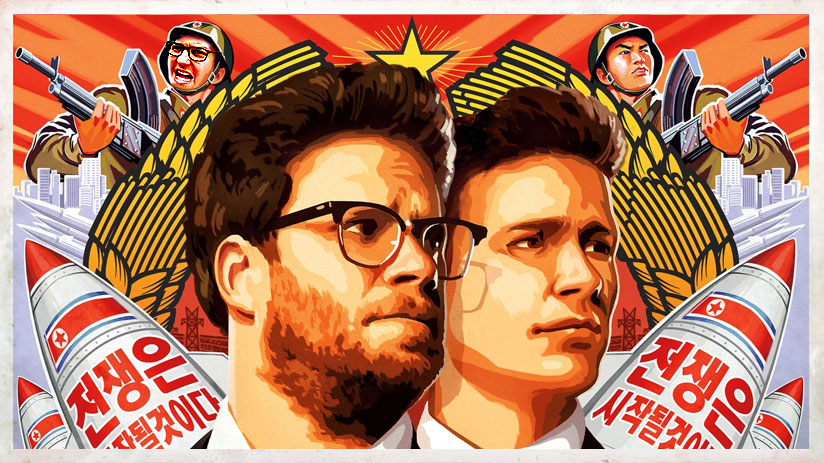 Should I be looking over my shoulder after watching today’s movie? I remember that was the feeling some folks had at the time of its release last year, but wow did that die down quickly – for today’s movie – the 2014 comedy, The Interview.

Day 1 of THE INTERVIEW @ my theater, TraverseCity,MI: Sold Out! People don’t like 2 b told what they can & cannot see pic.twitter.com/yrJgY3Ez7a

Watching this movie today, I actually do understand why the controversy was there. It does make the North Korean leader look pretty absurd- but it wouldn’t be the first time!

I don’t remember anything like this happening with Team America: World Police when it came out. Maybe because it was much more absurd? Maybe because daddy and son look at things a little differently?

As I was saying, I do get why there was controversy with the plot (and particularly who the plot revolved around) of the movie, but what I find funny is that this isn’t some giant dramatic expose – but a typical buddy comedy from the minds Seth Rogen and Evan Goldberg – the same duo that brought us Superbad, Pineapple Express, and This Is the End. I am a real fan of both of these guys and have enjoyed just about everything they’ve done (I even liked what little I saw of The Green Hornet – but confession time, I’ve never seen Pineapple Express. Maybe next June.)

While Rogen and Goldberg served as screenwriters and directors for this movie, Rogen also starred in it with his frequent collaborator, James Franco – who serves as the lead star of this movie. I’d like to say I’ve enjoyed Rogen and Franco together dating way back to their time on Freaks & Geeks together. Oh, I do. I definitely do, but I only watched Freaks & Geeks within the last five years and not when it originally came out – still you could see that they worked well together even back in 1999.

This time around the duo play a TV talk show host (Franco) and a producer (Rogen) who decide to ask for an interview of Kim Jong-Un, who they discover is a big fan of their show. The Korean leader agrees to the interview, which gains huge publicity in the media – as well as the attention of the CIA, who send an agent – played by Lizzie Caplan – to ask the duo to assassinate Jong-Un.

So Rogen/Franco head to North Korea to conduct the interview and act out the assassination.

I’m assuming this is because Dennis Rodman refused?

You have to remember to turn off a good portion of your brain, because it makes almost no sense why the CIA would these two man-children – but that is what makes this movie funny.

It’s not a great movie – it’s not a movie with any kind of political message, but it is an American movie, and I do love that even a movie as silly as this can inspire people to stand up for their rights and for the rights of art. Fine art this is not, but funny art it still is.

But I finally saw it, and I am glad I did. Good not great – but I always enjoy these guys and Seth Rogen is one of my current favorite comedic actors, so I am glad I FINALLY saw it. And I’m glad I did.