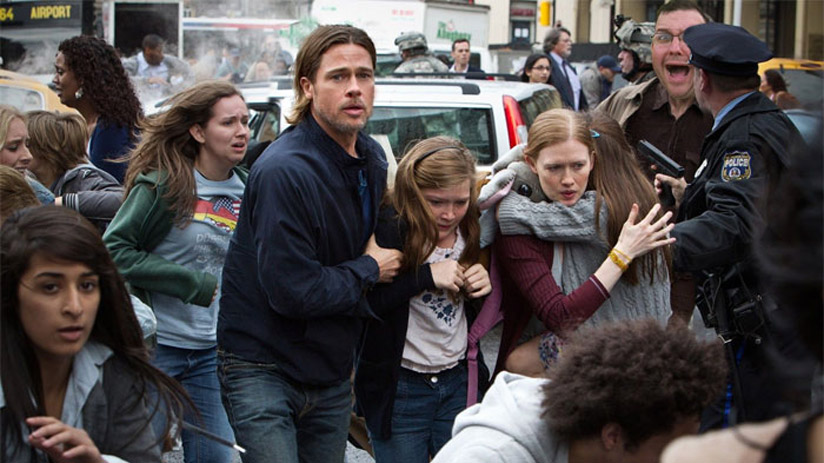 And the final 10 have begun.

(I wonder if I should’ve saved this until tomorrow and watched “21” for movie 21….well too late for that now. Maybe next year.)

It’s Saturday night and I am up at my in-law’s in Laconia, NH. It’s Bike Week up here, so the low hum of hundreds of motorcycles can be heard from miles away where people are doing God knows what. Me, I’m relaxing and blogging about World War Z, movie 21 in my FNE Movie Month.

Going into this movie, in the back of my mind, I kept thinking about everything I heard about this being really “nothing like the book” and ho “the book is so great” and “the book is so much better.”

I read the book….Well, I started reading the book. I read it for a little while. I got bored. Maybe I wasn’t in the mood for the structure of it. I stopped.

I know, I know. Everybody loves the book. So cool, so well written. I am sure that it is and that it was. But for whatever reason, when I was reading it I just wasn’t into it.

Since it is so different, maybe someday I’ll pick it up and try again. But not today.

Today I watched the movie.

And for all the lovers of the book out there who want to hate this movie, try to separate them. Take the basic them of what happened in the book, and then “hollywoodify” it on giant big budget scale. That’s what this movie is.

And it wasn’t half bad. In fact I enjoyed it.

One of the nice thing about this project is, I’m not a movie reviewer that watches every movie and then writes about the ones he loves and the ones he hates. I’m just a movie fan picking movies I already want to see – so I go in already interested it. And I came out pretty satisfied.

There’s not groundbreaking about it really. Pretty good effects (watching it on Netflix on my 17” laptop), a couple unique takes on the zombie fad, some good performances – and some moments where I felt anxiety.

It really was one “Brad Pitt get out of there!!” moment after another, but hey it still made for a pretty good ride.

The one thing I found weird was – Matthew Fox of LOST was in this movie as one of the soldiers in a helicopter rescue scene. He then made one more appearance saying a couple words. I found it weird that he – a pretty recognizable face – was playing the part of a glorified extra.

Well, after looking it up it makes sense. It turns out that he was supposed to have a more significant role that, when rewrites and reshoots happened, got cut to barely anything. The funny thing is, the rewrites were done partly by Damon Lindelof – one of the creators LOST. Oops.

The movie went over budget, had to have scenes rewritten, had to add to reshoot material. They even had a completely different ending in mind (though I am not sure if any of it was shot). You hear those things and it adds a red mark to a movie going in, but that’s not really fair. Things change in giant productions like this, and with how much money people invest in these things, you’re damn sure they are going to at least TRY to get it right.

And I think they did. If you didn’t know about any of the production issues beforehand, and just went in looking for a fun/scary ride, I think you’ll be satisfied.

Hell, even if you know all about that stuff – I still think it’s worth a watch. And if they do make that sequel (and the box office returns suggest to me they will try) I’ll be there….months later….watching it on my computer…

Man those bikers are still loud…..