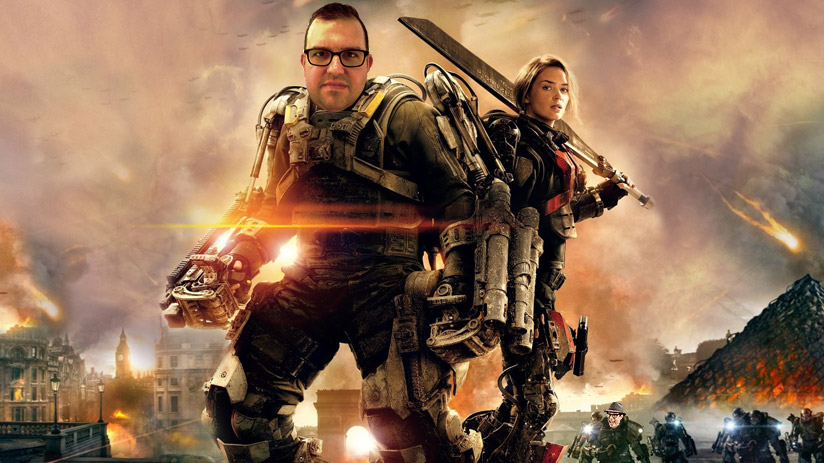 When I first saw the trailer for this, I pretty much wrote it off as some cookie-cutter science fiction vehicle for Tom Cruise. I am here today to apologize to you Tom (since I assume you are reading this right now) because I loved today’s movie (directed by Dough Liman), 2014’s Edge of Tomorrow.

I believe the HBO synopsis says it’s like Groundhog Day meets Aliens, and that’s not that far off (though I read Starship Troopers someplace else and I like that better). To sum it up, something happens to Tom Cruise’s character that allows him to relive a particular day in a war between humanity and an alien race over and over again. The only thing is, he has to die to reset the day.

That once little extra caveat is what sold the movie for me, and really it’s what made it fun. The fact that Cruise kept dying and returning. And dying and returning. I know, for a movie to work the main character has to die – and keep dying? Sounds weird, but it really works well in this movie. They had a lot of fun with some of the death scenes. Sometimes deaths came fast, sometimes they came as a way to get out of a situation and start over. Sometimes they happen – just by accident.

Going in, I thought that this a futuristic way for soldiers to learn more about their enemy – that this was a technology that was part of the future military and Tom Cruise was using it. The cool thing is that nobody knew what was happening to him. Every time they met with Cruise’s character it was more often than not for the first time on his first day at the military base – only for him he’s met these people over and over and over again after repeatedly dying while trying to get closer and closer to saving people.

The only person that did know what was going on was the character portrayed by Emily Blunt – because it had happened to her before too. Still, every day Tom Cruise would have to introduce himself to her, explain what was happening, and take things from there. He started knowing these people backwards and forwards, yet for them they had only just met on that day.

If you like fun action/sci-fi done well and you let this movie pass you by last year, it’s on HBO now. I suggest giving it a watch – but if you do after reading this, come back here and let me know what you think. I think I need to go back and watch those Mission Impossible movies….