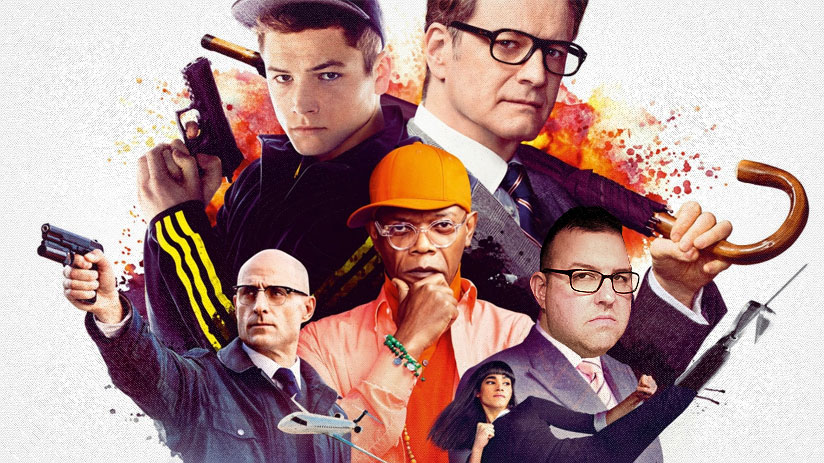 Apparently I’m a giant Matthew Vaughn fan. I haven’t seen all the movies he’s directed (yet) but I’ve loved all the ones I have seen. First there was 2010’s Kick-Ass, a movie AND comic book that I love. Then there was 2011’s X-Men: First Class, which I watched for last year’s movie month. And loved.

And that brings me to today’s feature, and Vaughn’s latest film as director, Kingsman: The Secret Service.

And yes, you guessed it – loved it.

Once again Vaughn is directing a movie based on a comic book by writer Mark Millar (pronounced “miller”) – of whom I am a big fan of. The first time around (the previously mentioned Kick-Ass) was more of a true adaptation, with some changes and tweaks in the details. This time around, even though the plot was more-or-less the same, there were tweaks to the background of certain characters.

First off, (minor comic book spoilers) the comic book was called simply called The Secret Service. There was no “Kingsman” nor was there any use of Arthurian names. Also, in the comic book, the spy who recruited Eggsy (who in the comic only goes by his name Gary) was actually his uncle Jack. And the spies were part of MI6, not an independent group.

And the recruits brought on in the comic are attending spy school, not filling a slot of a dead member – so there is no competition, and more students help in the comic’s climax.

There are other changes, including the background of the villian, but his plot is more-or-less the same.

There was one thing that I thought they would actually change. But they didn’t. I’ll let you decide what that is.

I started reading the comic when it first came out, and for some reason stopped. Once I saw the trailer for the movie, I went back and read the entire thing. It’s only 6 issues long, so there’s a definite beginning, middle, and end.

And when that one thing happens in the comic, I actually gasped while reading it on my tablet on the Green Line pulling into North Station.

But enough about the comic, let’s talk about – the actual movie.

I love Matthew Vaughn’s style of film-making. There’s just something he does with action and with characters that feels real and yet exceptional at the same time. The movie had a sense of being in the real world, just amplified. The action was kinetic (I think that’s the word) and the violence was extremely violence. The movie was rated R, so just like in Kick-Ass, they pull no punches in making the violence extreme, yet almost silly to the point of comedy.

It also helped to have some great actors anchoring the story. The main lead was played by Taron Egerton, who looked familiar to me, but I had never seen him in anything else. He did a nice job of turning from a street rat into a gentleman spy. The main gentleman spy was played – fantastically – by the great Colin Firth. As great as Egerton was in this movie, Firth was even better. Then they get THE Michael Caine – star of Jaws: The Revenge – as the head of the Kingsman? Rounding out the good guys is Sophie Cookson (in her first feature film) and Mark Strong (who Vaughn also used as the main mobster in Kick-Ass) who was great as (codename) Merlin.

The villian’s henchman in the comic was turned into a hench-woman in the movie. She was played by Sofia Boutella and was really weird/cool with those blade legs/weapons. The villain himself was played by a little known actor by the name of Samuel L. “Motherf***r” Jackson. You know him from most movies you’ve seen. Once you got past the decision to give him a lisp, I think he actually did a really good job of being sincere and charming, but also a little scary and a who lotta crazy.

A dozen days and a dozen movies in. This might be my favorite one so far.