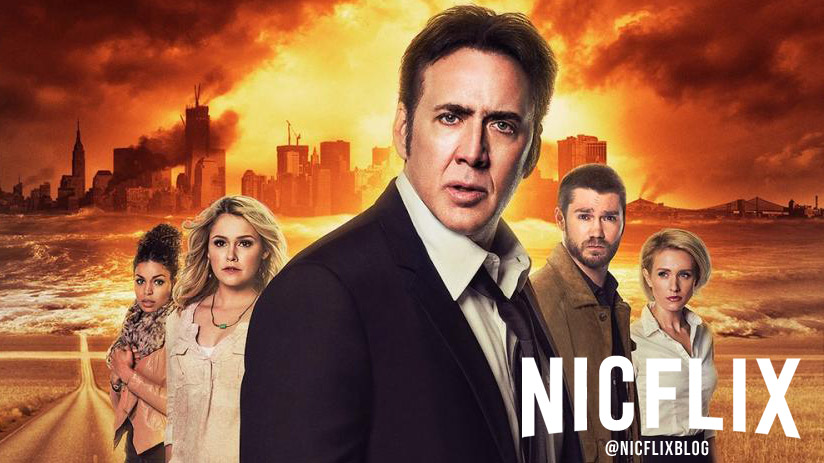 What the hell happened to Nicolas Cage? Sadly, this is a question that I think about almost every day when I log into my Netflix account and see another generic, direct to DVD movie I have never heard of starring the one and only Mr. Cage. At one point he was a critically acclaimed, dramatic, Academy Award winning actor (“Moonstruck”, “Leaving Las Vegas”). Over time he became an unlikely leading man who dominated the box office with action hits (“The Rock”, “Face/Off”, “Con Air”, “National Treasure”) and family and romantic dramas (“The Family Man”, “City Of Angels”). Now…not so much; unless of course you include “Rage”, “Outcast”, “Trespass”, and countless other identical, one word action thrillers.

Who could forget this 2012 Best Picture nom?

Which leads us to this column- Nicflix! Every month I plan on watching a forgotten Nicolas Cage movie that is on Netflix so you don’t have to! You can all thank me later. Of course now the question becomes where do I start? Hmm…

Our first movie is called “Left Behind” and I feel like a little backstory is necessary before we jump in. This is actually a remake; the trailer to the original is below:

Yes that is right! “Left Behind” is a Christian propaganda, direct to DVD action movie that is a remake of a Christian propaganda, direct to video, action movie starring Kirk Cameron. Yes, Kirk “Growing Pains” Cameron! And both films are an adaptation of a book that is a New York Times Best Seller because Americans are freaking crazy! Anyways, on with the show…

We start at JFK airport as the opening credits roll. And the second billed actor in this movie is Chad Michael Murray of “One Tree Hill” fame. I use the word fame loosely here. Singer Jordin Sparks and an extremely old looking Lea Thompson round out the all-star cast.

Why am I doing this to myself?

Well we made it to about 2 minutes and 48 seconds before our first bible passage and debate about God!

So Nicolas Cage is an airline pilot who is cheating on his wife by fucking a stewardess….sorry about the language I mean flight attendant. For the record, his flight attendant girlfriend is way hotter than elderly Lea Thompson so his affair is a no brainer.

Uh oh…his daughter flew home to surprise him for her birthday but just caught him with Hottie and now Nicolas Cage tells his daughter he has to work so cannot hang with her.

By the way Chad Michael Murrary is some kind of famous journalist who already has a crush on Daughter Cage as I will call her because character names seem unimportant here.

I actually take that back because Nicholas Cage’s character name is Captain Steel…CAPTAIN STEEL!

Flight is taking off with Chad Michael Murray on board and Captain Steel flying. Daughter Cage is all emo and heads home.

21:38 and we get a random shot of the Holy Bible…I guess just to remind us that God is everywhere?

This is the most diverse plane ride ever- fat, skinny, black, white, Arab, Northerners, Southerners, midgets. A cute, little black girl is befriending the midget because they are both small. She has a football-playing father because all black people play sports according to this movie.

28:00 in and I have never wanted to listen to “God Hates Us All” by Slayer so much in my life.

I literally blacked out from boredom for like 5 minutes but now something is finally happening! Little Brother Cage (oh yeah Captain Steel has a son also) just disappeared and now everything is shaking including the plane in the sky.

Lots of people disappeared leaving only their clothes behind. This includes Little Brother Cage.

The world is in chaos but the flight crew managed to stabilize the plane. People are still scared. Captain Steel is trying to find out what happened. Blah, blah, blah…

Literally about 20 more minutes have passed and I have not paid attention once. This movie is a sin.

The Arab on the plane is not a terrorist in case you were wondering. The midget thinks he is however. The Asian on board is the smart one also. This movie obviously does not believe in stereotypes.

Hottie flight attendant is useless but hot. Chad Michael Murray is being an annoying prick by interviewing and video taping everybody.

Only type of person not on the plane is a gay person. Probably because the bible says homosexuality is a sin…somewhere in there it says that…well according to Kirk Cameron anyways.

The wing of the plane is on fire after they hit another plane. Nobody was flying the other plane according to Captain Steel. I should probably feel suspense about what is happening and curiosity as to what will happen, but I just hope they all die and this movie ends.

A black woman just pulled a gun on the plane…the racism continues…Chad Michael Murray wants the gun pointed at him. Please do so.  And then shoot him in his face.

I assume the gun-toting lady is played by Jordin Sparks?

Captain Steel is talking to Hottie about God. Hottie- “Where is this coming from? You have never spoken about God before…” Steel- “From…my wife.” Hottie walks away stunned.

Everybody thinks all of a sudden God must have caused this event.

Hottie and Captain Steel are having at it. Not in a sexual way for once but in an arguing way. Captain Steel has lied to her, his wife and Daughter Cage. He has lied to everybody. But he is looking for God. And he wants Hottie to find God now also.

Daughter Cage is visiting a pastor at a church. The pastor also thinks this event was caused by God. She screams why would God kill my family. Pastor says God took them to protect them. Not sure why everybody knows so much about God and His plan or why they think God is behind this but…

Chad Michael Murray and Captain Steel are BFFs with God and with each other now and are hanging out having a boring heart to heart in the cockpit.

Plane is running out of fuel from when it caught on fire. Captain Steel needs a runway. He was heading back to JFK but that and LaGuardia are off limits! What will they do? Hopefully crash the plane and die so this movie ends.

Daughter Cage leaves the church and is again walking around aimlessly like a bum. She is on a bridge. I hope she jumps to her death.

Just FYI the Southern guy on flight is realizing he worried too much about money. Not enough about God. And Heaven. Somebody send him to Heaven now please. #RandomPointlessScene

Oh crap! Looks like Daughter Cage is thinking about jumping… do it! Do it! As she hangs out and thinks about jumping, this song begins to play:

Daughter Cage looks to Heaven and says she blamed Old Hag Thompson for splitting their family apart but she apologizes and then prepares to jump but guess what? Her phone rings and Chad Michael Murray and Captain Steel give her a call and save her life! Captain Steel- “Mom told me about this.” Daughter Cage- “Mom told me too.”  In other words crazy Christians are always right!

Captain Steel tells people they are close to NY. He tells them to pray. They get together and pray after hating each other all movie. That was easy!

Daughter Cage is on a motorcycle…where the hell did that come from?

Daughter Cage somehow helps them land the plane. Not sure how, I really wasn’t paying attention. Everybody makes it off the plane alive. Captain Steel apologizes to Hottie, but she is completely cool about everything. He embraces with Daughter Cage.

AND NOBODY WHO DISAPPEARED COMES BACK?! WHAT THE HELL?! Oh I guess they are in Heaven because they were saved by God. Stupid.

On a scale of “Leaving Las Vegas” (good movie), “Ghost Rider” (a good bad movie) and “Season of the Witch” (just bad), this definitely gets a “Season of the Witch”. It flat out sucked. I found it hard to pay
attention to even during its most action packed scenes. I was raised Catholic but this movie was way too God friendly for my casual Christian tastes. I need to go listen to “Number Of The Beat”
by Iron Maiden and sacrifice a goat.