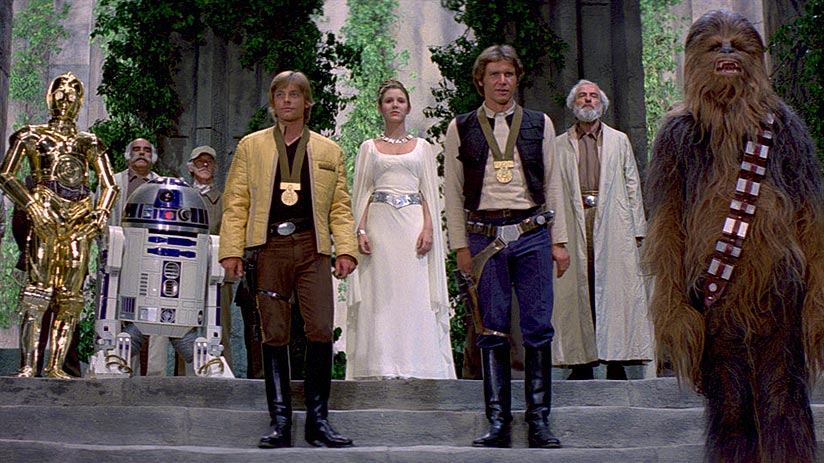 Okay it’s all of those really, but when I was a kid – when I was not even a year old, it was simply then known as Star Wars. The little epic that started it all. It’s funny that I’m pretty down on the sequels, and yet, I’ve seen all of the sequels now twice each since the last time I watched this movie all the way through.

I remember in 1994, I went with my brother and friends to Montreal. We didn’t really care for it too much and ended up in our hotel room, with my video camera hooked up to the TV, watching the VHS of Star Wars. I remember back then thinking – wow I haven’t watched this in a while. I am sure I fell asleep before it ended. But in 1997, when the special editions were released in theaters, I remember going with my best friend and my girl friend (still best friends – and I married that girl) to see it at Showcase Cinemas in Lawrence, MA.

I’m almost 100% that was the last time I watched this movie from start to finish before tonight. Here I am wanting to watch one Star Wars movie per month starting in July – and I’ve done so, but since Episode I, I’ve really been pushing it to the last minute of the last day. Hopefully November – and Empire – will be different.

And we all know what December brings….Ewoks! Among other things.

The details of the plot of this movie weren’t etched into my memory. Most of it I remembered, but how it all came into shape was nice to relive. How most of this movie dealt with an attempt to get plans back to a planet – only to find that planet gone – only to be captured – only to escape, along with the princess who sent out those plans in the first place. The plans – to destroy a Moon that the Empire controls. Wait…

It’s funny, for a two hour movie, there really is little down time. It just goes from beat to beat to beat, and gets bigger and more epic as the story progresses. I can only imagine how it felt being in this little known, seemingly goofy space movie – and how it changed the world.

Literally this movie changed the world.

It changed the world of movies, of technology, of toys – forever.

And is it a stretch to say, this is the last good movie that George Lucas directed?

May the Force Be With You!