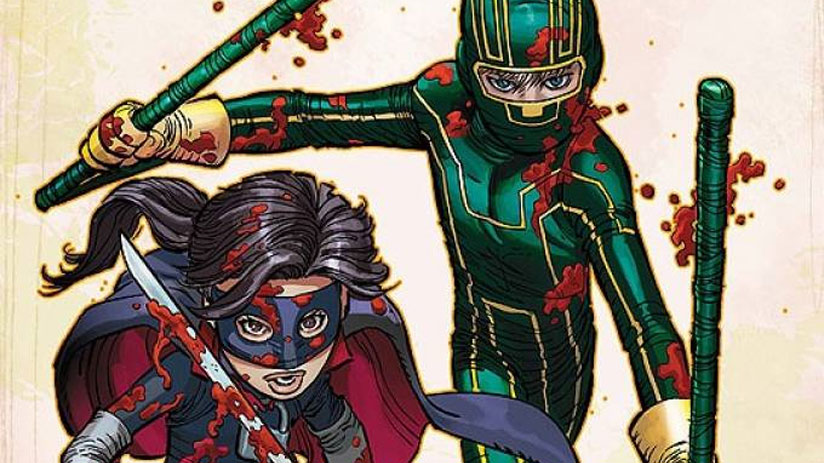 I am still very new, very “green” when it comics to the world of comics, but I know that I want to learn more and I want to become more involved with it. I used to just go to a neighboring Public Library and get books there, but I’ve also started hitting my local Comic Book Store as well to start buying books and building a library of my own.

This weekend however, I picked up a bunch of books at the library so I had things to read while visiting the in-laws in Laconia, NH. With so many of the most famous books/characters having huge catalogs with rich histories, it’s nice to be able to pick up books that you can start from the beginning – or better yet, read in one collection.

Kick-Ass is one of those books.

I’ve heard about this book for a couple years now, and was excited to see previews of the 2010 movie adaptation. Unfortunately, I didn’t see the movie while it was in theaters – but on the bright side I am glad because I wanted to be able to read it first. I find, especially with comic books, that reading the original source first is important because THAT is the story as it was originally meant to be seen/told.

Sure, I’ve heard in a Matthew Vaughn interview that this book was being developed as a movie from the beginning, and the movie was being worked on before the comic was even done – but still it was a comic book first and that’s how I wanted to experience it first.

I don’t know a great deal about the book’s writer, Mark Millar – but I am learning and I want to learn more. I recently read Wanted and really enjoyed it. That’s another one that was made into a movie, but I’m not totally sure I should watch that one. Is it any good – besides the fact that it is quite different from the book?

I know one thing is for sure, as much as I enjoyed Wanted, let it be put on record now that I loved Kick-Ass ten times more. While the books had in common the brutal reality of violence, Kick-Ass had characters that I could better relate to and empathize with more, while with Wanted I just felt like a voyeur watching people become soulless killers.

The story was so much fun – a fantasy of any superhero fan as a child (even a 33 year old child) – and the dialogue was brilliant. I laughed out loud more than once – and cheered (not out loud) for “Kick-Ass” himself as I breezed through all eight issues in the one volume collection I read.

But as much as I laughed and cheered, I also gasped and stared in amazement at the harsh, honest, brutal violence that was created through the amazing art of John Romita, Jr.

I find it amazing when you can read – when you can feel – emotion coming from the eyes of a 2-D character painted onto a page, but Romita’s art pulled that off. Sometimes, I find comic book art jarring to the point where I have to focus on the story itself and the art is just there. In the case of Romita’s work in Kick-Ass, the art was in no way a distraction. On the contrary, it was a necessary piece to the Kick-Ass world. It’s just that good.

I love reading comic book stories that I can go from start to finish without waiting each month for another issue. However, it is a little sad that you don’t enjoy this story along with everyone else, and anticipate what is going to come next month – because all you have to do is turn the page.

So, normally when I come to an end of a story, there is a feeling of sadness that my time with this story and its characters have come to their end. That’s why I was excited to hear that Mark Millar is working on a sequel, currently under the working title:

Kick-Ass: Balls to the Wall

Honestly, how in the world could that title not fit better?

I’m sure it’s been said a thousand times, but I can’t sum things up better without being another person to say –

The Dream Life
Best Movies Ever : Back to the Future
To Top