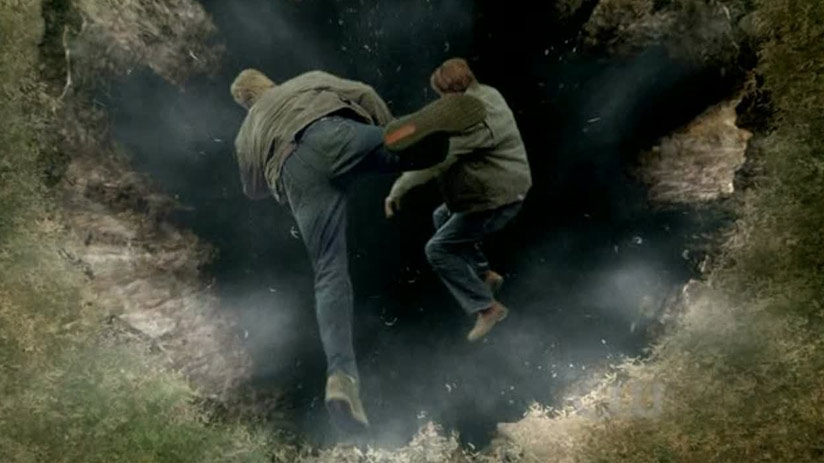 Ah, the Supernatural season finale. I know two things are for certain. First, we’re going to be left with some kind of cool cliffhanger. Second, we’re going to start off with “Carry On My Wayward Son” by Kansas.

And we got both – but were we originally supposed to? Of course, the show started off with the classic rock…classic, and a recap of the entire season. What followed was a really, really good episode, and at the end we were left with a cliffhanger of sorts. I just wonder if that is how it all was originally supposed to go down.

If you are a fan of Supernatural, then you are probably familiar with Eric Kripke, the executive producer and creator of the show. It was in his mind that this show had a overarching story that would take five seasons to tell, and this episode – “Swan Song” – was to be the final episode of that story. And it somewhat was.

The title of the episode alone made it seem like this was going to be the last hurrah for Sam and Dean. The opening scene and most of the ending of the episode made me feel the same way.

I absolutely love how the opened the episode as an homage to the ‘67 Chevy Impala. It really is the third lead character to the show and they did a great job pointing that out. I also loved how they made Chuck the narrator as he was writing his final Supernatural story, and at the same time relaying prophecies to the boys – but more on Chuck later.

I got the feeling that this show was written and almost completely produced as if it were going to be the series finale. The episode title, the narration, the flashbacks to their younger days all seemed like a perfect way to say goodbye to this great show.

But we all knew it was coming back so as much as they made us feel like we were saying goodbye, maybe this was more a way for Eric Kripke to say goodbye as he will not be back with the show this season.

In this episode we see Sammy say yes to Jacob, I’m sorry – I mean Lucifer. He said YES, just like Lucifer said he would. Sure it may all be a part of Sam’s plan, but he said YES!

Then of course he prepares for a battle with the new vessel for Michael, the boy’s recently resurrected half-brother Adam (perfect name). I love that Dean played a little Def Leppard to get him pumped as he interrupts the world’s greatest battle.

Then all hell breaks loose.

Bobby is dead. Cass is blown to pieces. Dean gets the crapped beat out of him, but somehow Sammy finds a way to fight it and when the door to hell is open he jumps in and takes Adam with him.

Seriously. I think this may have been exactly how Kripke wanted the show to end. Sammy sacrifices himself for mankind, and in doing so seeks the retribution or punishment he thinks he deserves.

Dean is left alone, sad, to either keep on hunting or to end up with the girl Lisa and her son Ben who he went to in the end.

But things didn’t quite end that way. Sure all that happened, but then something very interested happened too. Castiel had returned, was able to heal Dean, and also brought Bobby back from the dead. He said he had some improvements, but wasn’t sure if it was God that brought him back.

After Cass and Dean argue about God and Cass leaves (for heaven?), we are left with Chuck narrating as Dean arrives at Lisa’s. He talks about what the brothers were all about and we see a quick montage of them over the years. This totally felt like a series finale at this point, when Chuck types “The End.” to his book – but the again, just as he said – nothing ever really ends.

What does this mean? As he disappeared you almost see a quick flash of white, as if he was white, pure – GOD? Could it be that we met God years before on Supernatural but we never really knew it? Could it be that this was another added bit that maybe we wouldn’t have seen if the show was really ending with this episode?

I know one thing is for certain – Dean may be trying to gain some happiness back into his life with Lisa, but we all saw what looked like Sammy hanging out outside, looking in at him.

Was he really there (ghost? angel?) or was he a vision?

Was it really Sam or were we looking at Lucifer again?

Watch the final moments of the season for yourself again and leave comments to let me know what you think: