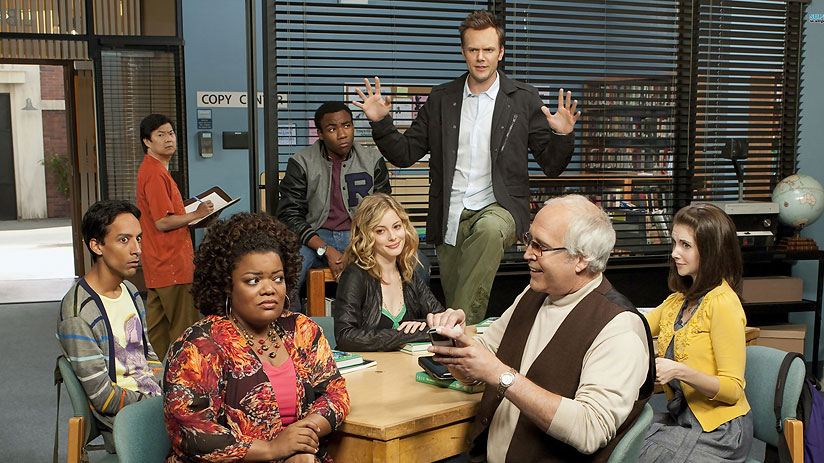 The butthole flag at Greendale Community College is flying at half mast today.

By now, I am sure that you’re aware that @nbc has announced that Community is not part of their midseason schedule. They say that the show is not canceled – but doesn’t that really just mean “not yet?”

It really is a shame that a show so unique and innovative can’t draw an audience – but it’s probably the uniqueness of the show that is to blame for its small audience.

That and the fact that it is on NBC.

Think about it, Two & a Half Men and Mike & Molly get great ratings, but there is nothing special about these shows – and dare I say not much funny about them (even though the laugh track tells me there is).

But those shows are on CBS – and I’ve come to the conclusion that more people watch CBS than any other network, so whatever show comes on CBS – that is what they’ll be watching.

My 70 year old father-in-law knows what the Big Bang Theory is – why? Because it’s on CBS.

Am I going to hurt your feelings if I tell you the truth about that show?

I watch it. Actually I’ve never missed an episode. I find it amusing. I chuckle from time to time – maybe even laugh once in a while.

But for Christ’s sake that show is overrated.

Maybe it’s the laugh track? Maybe it’s because everybody tells me how great it is? Maybe because it constantly beats the tar out of the Thursday night NBC comedies (Community and Parts &Recreation being my favorite).

Yeah, I think it’s jealousy on my part. When I see the creativity and quality that goes into both Community and Parks & Recreation – only to see it get destroyed by a multi-camera, laugh-tracked, simple joke television show it pisses me off.

I think I’m just bitter really. Bitter at NBC and at audiences. At least NBC tries to deliver these quality shows – but the audiences aren’t there – so the sponsor money isnt’ there – and really what is NBC supposed to do?

They do this for the money – all the channels do. The producers do their best to create quality shows, but if they don’t get a good enough audience – sponsor money isnt’ there – and the cost of creating these shows just becomes too great.

Of course that is why there are so many reality shows. Cheap cost to produce and therefore the sponsor money is that much greater.

OK – these are just the ramblings of an angry television fan. I apologize for any facts I got wrong or if I came of like a crazy person….

There is still a bit of hope out there – so I’m going to go hold on to that now (as I rock back and forth in the corner holding my superman blanket.)