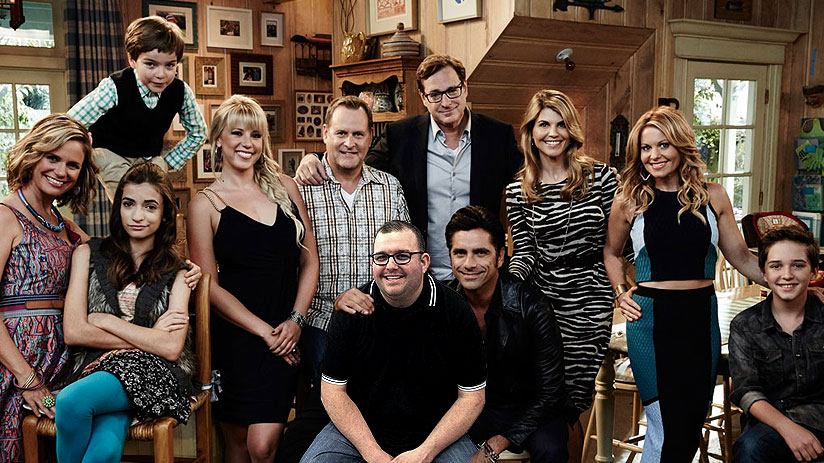 Sixth grade. I was in sixth grade with Full House premiered in September of 1987. I think that is the reason the show felt like it was on forever. Sure eight seasons is a nice long time, but being 11 years old when a show starts and remembering watching the final season in my dorm in college really makes it feel like it was just always on.

But really – what it a great show?

It was a fun, nice, family comedy right? As a kid I loved it. Then I stopped caring. Then at the end, I think I tuned in to a few episodes because I lived the life of a hermit during my first year of college. I’m not even sure I ever saw the finale, but here is where the Tanner clan last left us…

Wait. Michelle lost her memory? I can only assume that it had adverse effect on her overall well being 20 years later.

Holy crap is it really 20 years later – and they’re back. They’re all back. Even Alex and Nicky are back. Everybody but…Michelle. I hope they explain that after she gained back her memory the next decade of her life was a struggle. She had a split personality where she would talk to herself as if there was another one of her in the room. Eventually she decided to move away from her family and any sort of reunion they may be streaming.

That has to be the only reason, right?

But to hell with Michelle – you know it dude. We still have everybody else – back – 20 years later – not for a cast reunion. Not for a TV movie, but for a brand new show set to premiere on Netflix next month – Fuller House.

Basically take the premise of the original show, and push it forward 20 years. Now DJ, Steph, and good ol’ Kimmy Gibler are moving back into the same house to help raise DJ’s kids.

I was going to tweet out that it was a good thing that Dave Coulier has been living on the set of Full House since 1995, so it was a no-brainer for him to come back. Then I thought it was pretty mean spirited, so I decided not to. Then I thought it was still a pretty funny joke, so I’ll just hide it in here where nobody reads stuff.

Here’s the thing. The original show was an okay sitcom for the 80s/90s. It’s not the first thing I’d think of to bring back, but even watching that trailer did bring a little nostalgia back for me, so even though I’m not expecting much I will be watching at least the first episode. I just don’t think that nostalgia will be enough for me to keep watching, I’m going to actually need to enjoy it (even just a little).

Otherwise I’ll have to …Cut. It. Out. Of my Netflix queue.

UPDATE: This post was written in 2016. Since then I can admit that while Fuller House wasn’t a great television show – I watched every episode and cried during the series finale.

I Finally Finished Under The Dome, A Tremendously Terrible Television Show
Geek Mentality and A New Podcast
To Top