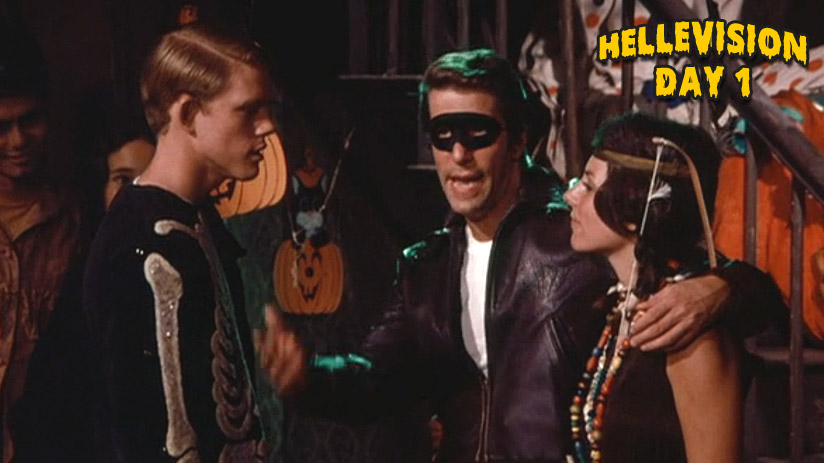 The weekend comes, my cycle hums, ready to race to you.

Yes of course I am going to start of HelleVision with my all time favorite show – a show well known for its horror – the classic and wonderful Happy Days.

Yes, I went back all the way back to 1974, back to season 2. Chuck was no longer a Cunningham, but they still weren’t shooting in front of a studio audience, and the Mr. and Mrs. C’s house still looked different – similar to what it would eventually become, but with the stairs and front door in the wrong spot.

Oh snap, isn’t that house haunted? Nah, but if they can get the “chicks” scared enough, they’ll be there to “comfort” them.

The thing is, Richie is very spooked out by the house, and Joannie making comments about them both being decapitated when they went to check the place out doesn’t help. Eventually, after talking it over with this dad – and more importantly, with Fonzie, Richie sucks it up and takes his date to the party.

Of course, once he gets there – there are a few spooky things that happen that scare him, but nothing supernatural actually happens – it’s all just in his head or jokes played by his friends…Or those jerks The Demons!

There is not an episode of Happy Days in which I won’t laugh (even when bearded Fonzie is teaching High School to Eugene). So of course I laughed. Fonzie’s costume alone was worth a chuckle. I also laughed for in a “times have changed” sorta moment. Sure this is the 1970s look at the 1950s, but when Howard Cunningham gave a trick-or-treater candy, told him he was cute, and asked him for a little kiss – I laughed because…well you just wouldn’t see that today.

No. I know there will be some shows where I’m a little weirded out or spooked out. And okay, there was one moment that I thought was spooky, but no I myself was not scared.

Sure, I know one of the biggest parts of Halloween is watching scary stuff – and I’ll do plenty of that – but with HelleVision, I’m sure I’ll be doing a lot more “ha ha” than “oh no!”

HelleVision Is Coming!
HelleVision Day 2: The Facts of Life, Season 5 Episode 6 “The Halloween Show” (1983)
To Top