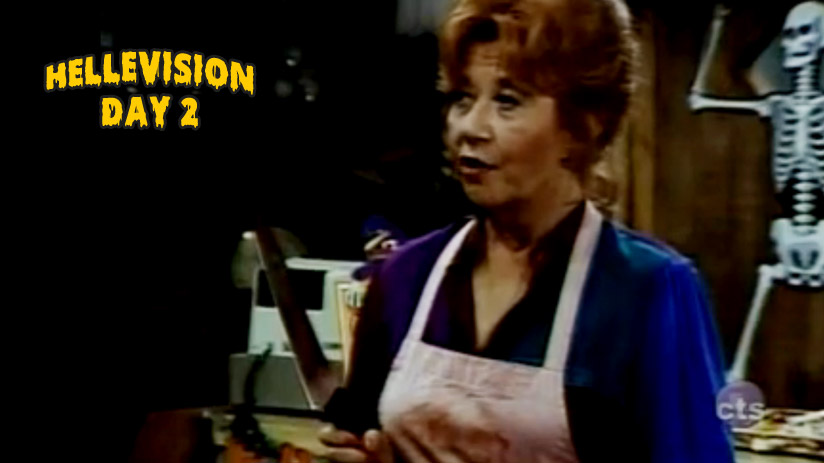 I’m sensing a theme here – well, besides Halloween. In my first posting, a Halloween party was being thrown in a house where everybody thought a murder had happened and was haunted. Today, for most of the episode we’re lead to believe that a building used to belong to a family where murders had happened – and of course, that the place was haunted.

Only this time, instead of a Potsie – we have a Tootie.

Yes folks today, I’ve decided to take the good, take the bad – hell, I’ll take them both and then I’ll have The Halloween Show – from season 5 of The Facts of Life.

It’s Halloween time at Enda’s Edibles, and an old codger shows up out of nowhere to order bratwurst – and tell all the girls that the building they live in used to belong to a family where a woman went mad and killed all her sisters with a butcher knife.

According to legend, whoever sleeps in the same room as the murderous sister – also goes mad! And of course, who sleeps in that room?

Later that night, or actually early on the next day, Mrs. Garrett comes upstairs to wake the girls so they can help her make bratwurst. And of course she enters the room in a very normal manner.

This is where the show gets weird. All of a sudden Edna starts acting just weird enough to spook out the girls, and Natalie said that she thought it was funny that Mrs. Garrett stood over her bed the night before sharpening her butcher knife.

Because that’s funny how?

See the thing is, Mrs. Garrett has no memory of that happening, so either Natalie imagined it – or Enda really is possessed by a murderess.

Those are the only two logical conclusions right?

Well later that night, Natalie says she discovered that old man’s jacket – the one who told everyone about the murders and possession – out in the back along with – wait for it – that butcher knife!

Cue Mrs. Garrett coming out with loads of sausage – meat that seemingly came out of nowhere – and of course she looks like she’s been butchering something back there – what with all the blood on her apron.

Of course the girls now assume that the woman who basically raised them is possessed and chopped up that strange old man and turned him into sausage. Who wouldn’t think that?

That’s right – hard ass Jo thought no way….but when the bread delivery man mentioned that the old guy DID come by earlier in the day, things started to look bleak even in Jo’s eyes.

Then, when two kids dressed as Hansel and Gretel came trick-or-treating, I think the overall creepiness that Mrs. Garrett display was enough to even put Jo over the top.

After Mrs. Garrett closes shop and tries to lure Natalie and Tootie in the back to be murdered (one can only assume) the girls take action and contain the evil Edna.

And who the F strolls in like his shit don’t stink? That crazy old man….or should I say – crazy old actor!?

I have to admit I figured that Edna hired this old man as her love slave and decided to play pretty mean trick on the girls, but it’s actually much worse than that.

Natalie – that lying bitch – hired the old man! She came up with the entire story – and get this – filmed them all during it for a class project. Funny though, doesn’t that sound like something we’d see today on YouTube?

A little bit. It had that sitcom feeling where the actors are talking very loud like they’re on a stage performing for an audience – which they very likely may have been doing. There were a few chuckles, but it was more weird than funny.

Scared? Again, no – but this one definitely weirded/creeped me out a bit – thanks to Mrs. Garrett’s strange performance.

And that’s what doesn’t add up for me. If Natalie made this whole thing up to, let’s not forget, get her best friends to think the woman who raised them was now a possess murderer – how can Mrs. Garrett’s weird knife-wielding, creepy-kid-talking behavior be explained?

It was the 80s. It was a sitcom. Who cared about explaining stuff like that?