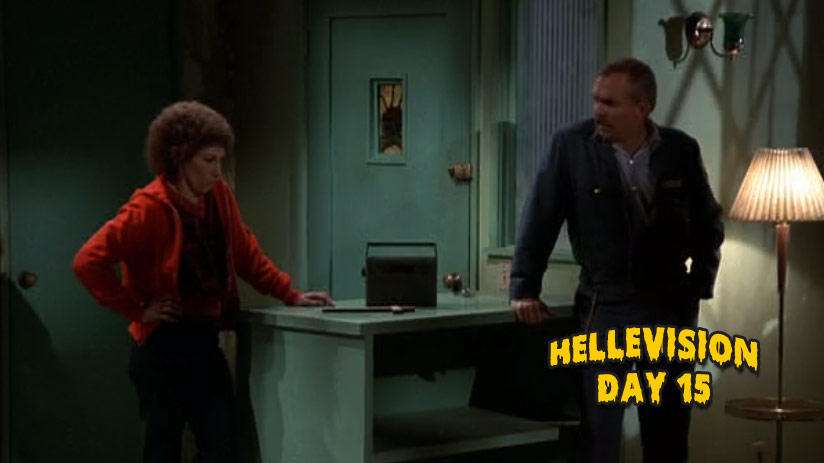 This is by far the longest episode title so far with HelleVision. Today I look back on what is arguably one of the greatest sitcoms of all time, Cheers, and its 5th season episode, “House of Horrors with Formal Dining and Used Brick”

Carla is house hunting, but it’s hopeless. She can’t find a house in her price range.

Sam’s hair is still stunning. Diane is still at the bar and she got Sam thinking about taking out airheads.

Cliff started a new route and he found a house for Carla in a neighborhood that is too expensive for her – but wait, this house is in her price range, so she goes to check it out.

This show is so great.

The house is perfect! She and all the kids could all have rooms of their own – and there’s a fireplace and a yard! And she put an offer in right away, and they took her first offer.

When Norm found out he mentioned that he looked into it because the asking price was so low – and it turns out the house was built directly over a graveyard of a 17th century prison and local legend has it that the dead are going to rise from the grave of whoever dares to live in the house.

Cliff, who Carla thanked for helping her find the house, is now scared shitless because they’re about to let Carla know about the house’s secret.

“Thank God, I thought you were going to say it had dry rot.”

Carla played tough, but walked away with a scared look on her face.

Time passes and it turns out she owns the house now, but she hasn’t moved in because she’s scared.

Sam and Diane convince Carla to spend a night in the house and get over her fear.

She gets there and is so scared, but Cliff and Norm come by to spend the night with her. Norm bails so it’s just Cliffy and Carla. Cliff plays some music on the radio and reminisces about high school dances that he never actually attended. Carla got all defensive when he said he was helping out a friend on a scary night, so he was about to leave when Carla offered to teach him to dance – obviously just so she isn’t alone.

Turns out they fell asleep at some point and made it through the night!

And just when she thinks the house is accepting her and she starts to plan out how to decorate it – the entire house starts to rumble and these bright lights shine in the window.

She jumps into Cliff’s arms thinking the evil spirits are coming to get her!

But…but….Cliff knows that sound – it’s an airplane. Turns out it’s not cheap that it’s haunted, but instead because it’s right next to the airport!

I sometimes forget just how much I enjoy this show, and with every episode on Netflix I need to go back and watch a few, because it’s always great. That being said, it’s late and I waited way too late to watch tonight’s episode – and the victim in all of this is the quality of my blog post. So if you actually read this – sorry.