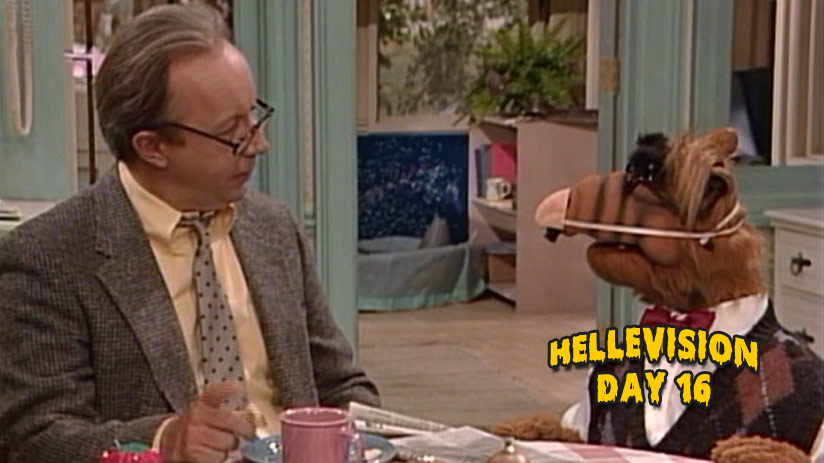 I have this distinct memory of asking my parents if I could have a later bed time back when I was 10 years old – just to watch ALF. Today’s HelleVision, I look back at the 1987 Halloween themed episode, from their second season, “Some Enchanted Evening”

It’s Halloween time in the Tanner house, and while young Brian is ready to go trick or treating dressed as a pirate, Willie forbids ALF from tagging along. Willie’s been stressed because he’s been taken off a project at work and some arguments he’s had with his boss leads him to think he won’t be getting that promotion he’s been after.

But ALF has a great idea – why not throw a party and invite the boss so you can suck up to him. Willie and Kate agree, but they decide not to invite the boss because it’d just make things worse.

So I forget – why bother having a party then?

When the party starts, people start showing up in costume – but it wasn’t a costume party. And then Willie’s boss and his wife show up!

Willie realizes that ALF is probably to blame – and wouldn’t you know it – ALF shows up at the party.

I have to say his costume was brilliant. He stuck a zipper to his front fur so it looked like he was in a fur suit.

He changed the invitation to be a costume party just so he could attend, and he invited Willies’s boss so he could suck up to him and get the promotion. A freak limbo dance accident lead Willie’s boss to be laid up, and while ALF was massaging the man’s back, he spurred on the conversation that lead to Willie both getting his project back AND getting that promotion.

And in the end Willie decides to take ALF out to one house for trick or treating. Of course the old lady who they visited did not have any candy left….But she did have plenty of cats.