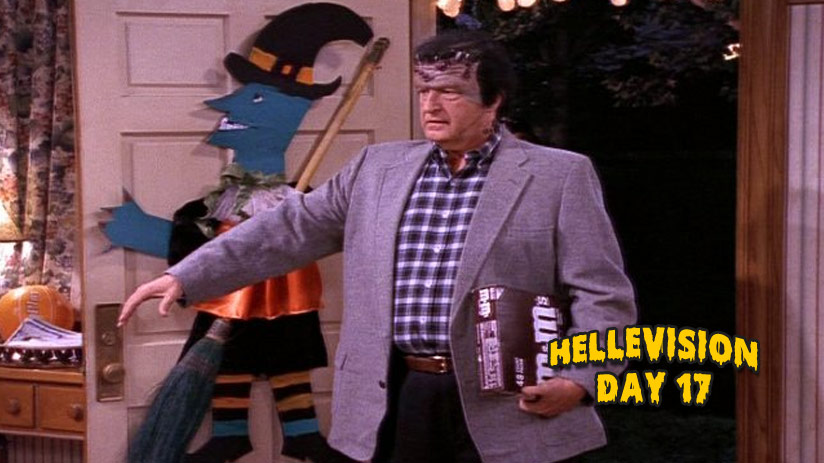 I forgot how much I enjoyed this show. I first started watching Everybody Loves Raymond when I was in college. I remember trying it one night – thinking it’d probably just another bad family sitcom – and really, really enjoying it. For some reason, I feel like I want to take credit for my parents and brother starting to watch it too. I know I got my girlfriend/wife into it.

I don’t know why any of that matters really.

When I think about it, I’m wondering if this is one of the last good shows I watched with a traditional laugh track or studio audience. I think the only show I watch now with that is Big Bang Theory, and that show is incredibly overrated. Enjoyable enough, but as I said – Raymond might be the last good show with the laughs built in. But the laughs from me were genuine when I watched the 1998 3rd season episode “Halloween Candy.”

Unfortunately, the above youtube video is a pay-per-view video – but I watched this episode streaming on Netflix.

Ray almost opts for the vasectomy, but ends up chickening out and instead actually went to the drug store and bought condoms. A large box of multicolored condoms.

And now the episode title is becoming clearer. I see where this is going.

It’s Halloween night while Ray and Debra take the kids out trick or treating (Sad seeing those little kids, all real siblings, and knowing that one of the twin brothers killed himself earlier this year), Frank is staying behind to pass out candy for them.

Frank Barone – Peter Boyle – dressed as Frankenstein’s Monster is epic. And if you don’t know what I mean by that, shame on you. Just watch.

Oh right, Frank is giving out Halloween candy to the trick-or-treaters, but he runs out and scrambles to find more in the kitchen – and finds a paper bag filled with what looks like multicolored chocolates.

“Good thing I found those chocolate coins you left in the cupboard.”

Frank cleared Ray out of all his condoms, and even though he tried chasing down a couple kids to get a least one back, while Debra was fielding phone calls from angry parents.

It was a pretty funny episode, though I wish there was more Robert. It wasn’t a scary/horror themed episode, just a funny one about a family on Halloween night. That’s why I always liked Everybody Loves Raymond.

It was just a funny show about a funny family.