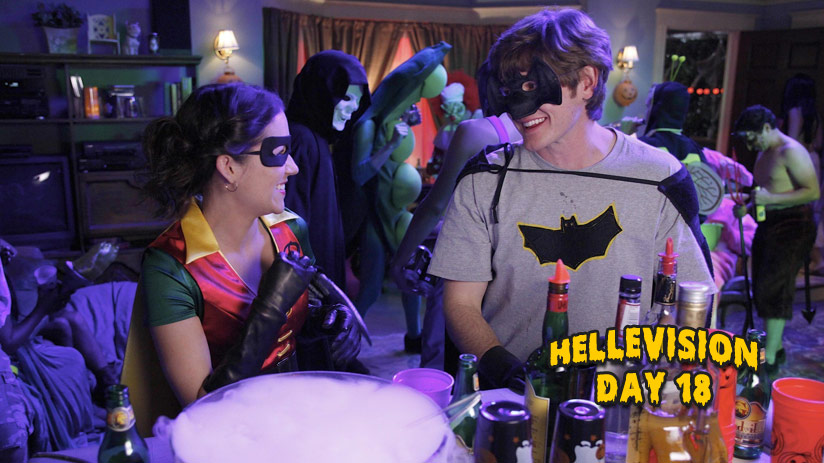 This show is so damn underrated. I could not recommend it more. It was on Fox for four seasons (2010-2014) and I feel like it went largely unnoticed – and it’s a shame because it was such a fun, silly show. I’m talking of course about Raising Hope – the story of a young man who find out he’s the father of a baby he had with a woman who was on death row. All of a sudden he’s got a baby – and he’s living with his parents (former Goonie Martha Plimpton and Deadwood bad ass Garret Dillahunt) and his great grandmother (the legendary Cloris Leachman).

And for HelleVision, today I’m watching the fifth episode of the first season, Happy Halloween.

Again this is a pay-per-view youtube video, but you can watch this episode on Netflix.

It’s Halloween in Natesville and Jimmy (the young dad) is still freaked out by the scary man in the mask that has been scaring him since he was a kid. Finally his parents break the news to him – it was actually his dad scaring him. Scaring him so he’d run back hope into his dad’s arms.

“I did it for the hugs!” was his dad’s reason. Now he wants to scare 7-month year old Hope just so she’ll hug him too. Oh, and by the way the dad – Burt Chance – is hilarious.

Yes that means the baby’s name is Hope Chance.

Meanwhile, at Jimmy’s work down at the local grocery store, his co-worker, and the girl he’s in love with, found out her boyfriend can’t go to a Halloween part with her. She was planning on going as Robin and her boyfriend as Batman. No problem, Jimmy said he has a Batman costume (lie) and he’d be happy to go with her. Now, the only thing he has to do is figure out how to make his own Batman costume – which he does, barely.

While he’s at the party, his mother Virginia (Plimpton) takes Maw-Maw (Leachman) out trick or treating, and Burt has plans to go egging. Yes, he is the grandfather. So Jimmy leaves Hope with his two buddies who are well under-equipped to be watching any children.

But Jimmy gets to hang out with Sabrina, so it’s worth the risk….Until Sabrina’s boyfriend ends up showing up after all. So now Jimmy gets to be the third wheel.

Later on in the night, Sabrina is passed out and her boyfriend ditches and asks Jimmy to watch over her – cuz the boyfriend is a dick and Jimmy is a good guy.

At the same time, Virginia and Maw-Maw TP a house that didn’t give them candy because they are adults. The cops come, but get distracted because Bert broke a window of another house and was running down the street with some kids.

At the end of the night Jimmy carries Sabrina all the way home.

I’ve already said way more than I should have – you should just watch this show – and EVERY episode of this show. Add it to your Netflix watch list right away. I stake my reputation on it. The show is that good.