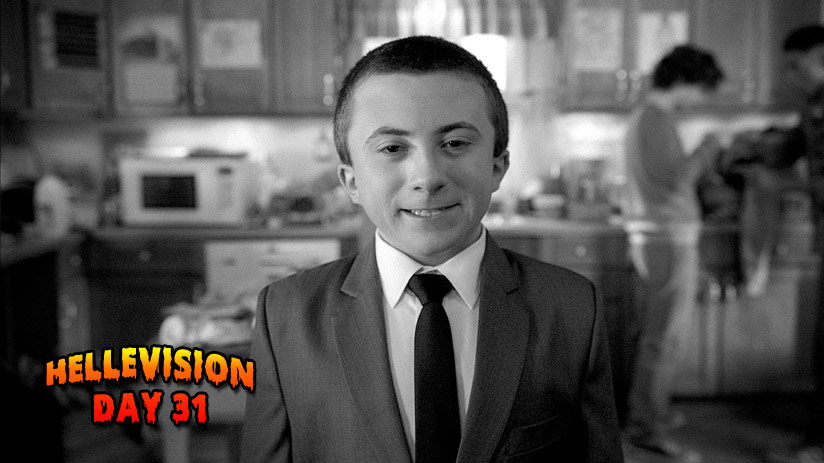 I’m not sure there is a more underrated show on television today. Wednesday nights on ABC have some funny shows on them – and everybody always talks about Modern Family. All the Emmy awards and nominations seem to focus on Modern Family – but on the same night, on the same network, another show has been on just as long – and guess what? I think it’s actually a better show. Yes, I’m talking about the family comedy, The Middle – and today, on Halloween itself, for the last post of HelleVision, I watched their latest Halloween theme episode, Halloween VI: Tick Tock Death.

I don’t want to use the tired cliche of “saving the best for last” but I can’t say enough how much I enjoyed this episode. It’s Halloween time in Orson, Indiana and the Hecks house is overrun by kids. Oldest son Axl was recently kicked out of his house at college, so he and his two roommates are staying at home. Middle daughter Sue is home to visit, and youngest – and really recently the best part of this show – Brick is well, always home.

This year the college guys are staying home doing nothing, Sue is going to pass out candy with her mom out in the driveway by a fire – just like Kelly Ripa – and Brick wants to go trick or treating so he can get a list of candy that his tall, awkward girlfriend wants. All the good stuff too, so dad Mike is going to have to take Brick to a nicer part of town.

That’s the basis of this episode, chopped up into three parts, all their own mini horror/spooky story. Sue and her mom Frankie end up wanting to egg their crazy neighbor (played by Brooke Shields) who is always terrorizing them. They get caught, and Frankie snaps and chases the neighbor through the woulds. It’s a pretty funny segment that is reminiscent of the classic Wolf Man.

Axl and his roommates see a spooky grim reaper that is just standing at their door, then in the yard, then in the back yard. They actually end up freaking out, packing all their stuff, and head back to college.

But it’s Brick’s story that is the best of all. He goes dressed up as Rod Serling. Not Rod Serling from Twighlight Zone, but Rod Serling from Night Gallery. Same guy. Different show. His trick or treating leads him to a house, a strange painting, and what might be a brief look into the future…

I actually don’t want to say more than this because I think you should watch this show – this episode and all their other episodes. It’s a lot of fun and the kids are really funny in it. I remember thinking – the wife from Everybody Loves Raymond and the janitor from Scrubs are on a family show together? And now I think of them as the mom and dad from the Middle first!

It’s Halloween night. 31 days. 31 Halloween themed episodes. 31 posts. An average – yes average – of one a day. I missed a few days in there. Sometimes on purpose, at least one time by mistake, but I always caught up. In the end, I have to say – Movie Month is so much more fun. There’s no theme involved. There’s no searching out for episodes that are hard to find. It’s just 30 movies of any kind (except I’ve never seen them before). Also in June there is a lot less going on – both on television, in sports, and in the real world.

I don’t think I could find 31 more Halloween sitcoms to watch next year – or least 31 that I want to see. This was pretty fun, but this may be a one and done…or a 31 and done for me.

At least I went out on a high note though!