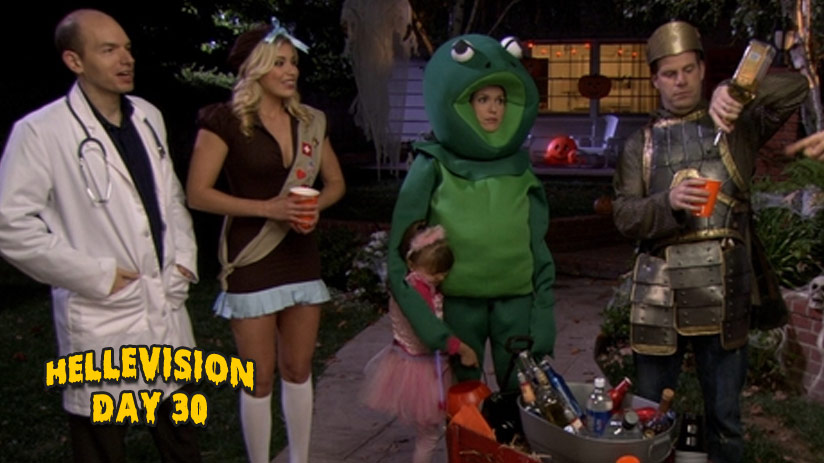 The League is an interesting show. I started watching it a few years ago, catching up via Netflix, and really got into it. It wasn’t always the most clever show, but there it was always enjoyable and funny enough – and sometimes it was borderline great. The best episodes usually have the character of Rafi in them (never enough though!). Unfortunately, for this 2010 Halloween episode – Ghost Monkey – there was no Rafi.

It’s Halloween time, and Kevin (Brian if you’re Rafi) is sick of the boring Halloweens he now has as a parent, and decides to mix in adult Halloween by pulling a wagon filled with alchohol. Meanwhile Pete (Tall Guy if you’re Rafi) met a girl to bring with him. He thought she was dressed as a witch for Halloween, but turns out she’s actually Wiccan.

That turns out to be a good thing because Taco (yes, that is the only name we know him as) stole a Monkey from a petting zoo, then flung it out the window after it went crazy in a car because of Andre’s horrible taste in music. Now he’s distraught that the monkey is dead, but luckily the Wiccan girl knows a little about monkey curses (not weird at all) and attempts a seance to see how the monkey is.

In the end it turns out the monkey is very alive, and chases them all back to Kevin and Jenny’s house, only to catch Jenny and hump her giant frog costume’s head.

Oh, this is a show about a group of friends who play fantasy football, right? Well it was sprinkled in there a bit – Pete let Ruxin choose Pete’s lineup, knowing the pressure and second guessing would probably get to him. It did.

It was a pretty funny episode, and as I said, it’s a pretty funny show. This past season has been okay, though I was talking with a co-worker the other day and we agreed it hasn’t been great.

But do you know what is great? That Rafi guy I keep talking about – so let’s watch some of him.

Warning – it can get pretty crude…