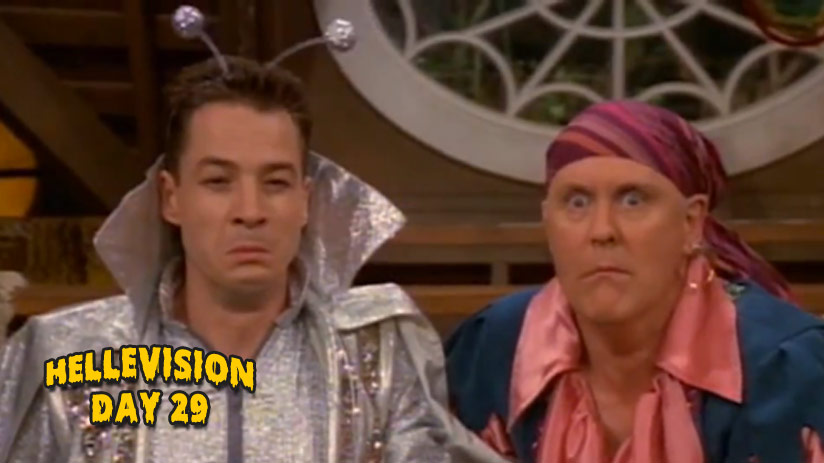 3rd Rock From the Sun is one of those shows that reminds me of my college years. I know my parents watched it, and I would too from time to time. It really was a fun and funny show, and this episode – Scaredy Dick – was no exception.

Full disclosure, I wrote some notes out here when I watched this at lunch today – and I lost them. It’s been a pretty busy week and time is short for a nerd like me. Monday night had me nerding out to wrestling. Tuesday night had me being sick – and not doing anything. Wednesday night had me at the Celtics. Tonight we have the Patriots, and tomorrow – well, tomorrow I’ll probably be catching up on TV.

Posts just aren’t getting all they deserve, but since I’m the only one looking at them – I think that’s no big deal.

So, let’s go over the quick synopsis of the episode. Dick is told that he needs to have a physical for work – but he’s super scared and keeps avoiding the doctor. Meanwhile Tommy and Sally are hanging out (dressed as Sonny and Cher) at Mary’s (Jane Curtin) house. They were there to hand out candy, while Mary was at the work Halloween party. Their job was to make sure the house doesn’t get trashed.

Dick’s doctor was actually at the Halloween party, and he freaked and ran home. At home, he and Harry were afraid that the house was haunted, but it was just their landlady trapped (and smoking) in the basement. Dick realizes that he can overcome his fears – and finally goes to the doctor’s!

This episode had a lot of laughs, and it just showed me how freakin’ talented John Lithgow is. When you realize that this guy is playing a super goofy character here, then years later was absolutely amazing as the Trinity Killer on Dexter….

It just shows you that really great actors can pull off any roll. Even one where you’re a ridiculous alien.