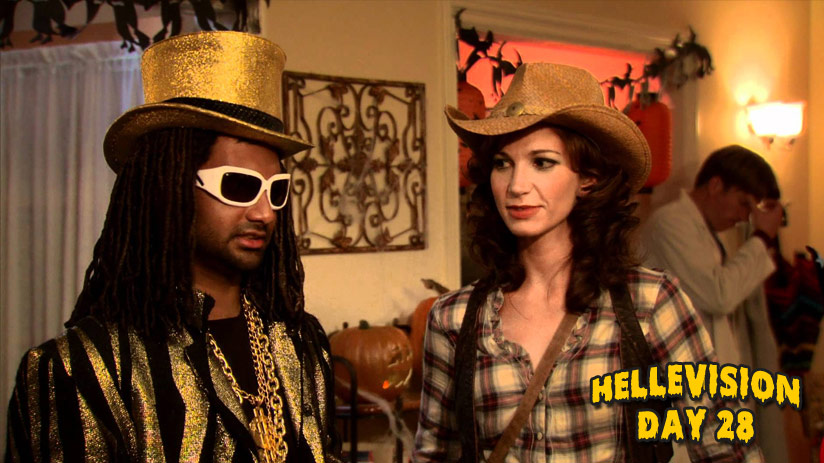 Parks and Recreation is one of those shows that I knew about, but didn’t watch right away. Finally, I started watching it on Netflix and really liked it. Then the really liking grew into loving it. I finally caught up with it at the start of the fourth season and stuck with it to the very end. It may go down as one of my favorite comedic shows ever. Today, whilst once again eating Chipotle for lunch, I find myself looking back at a second season episode – from 2009 – entitled Greg Pikitis.

It’s Halloween in Pawnee and every year Leslie Knope tries to catch young troublemaker Greg Pikitis in the act of defacing a town statue. She’s never been able to prove that it’s him, but she’s convinces he’s the culprit. Using her cop boyfriend (Louis CK) and lovable dummy Andy, she plans to protect the statue at all costs.

When nothing happens to the statue, she figures maybe she actually got through to him, but then goes back to the Parks office to get her costume – and finds it totally trashed.

Meanwhile, Ann throws a costume party that is pretty boring – until Tom makes a dance floor and gets people drinking.

Back at the Parks office, Andy and Leslie are sulking and drinking, and then decide to TP and egg Greg’s house because they’re so pissed. They actually do it, and as Leslie’s cop boyfriend arrives – a woman comes out – a different woman. Leslie is afraid they have the wrong house, but nope. She’s Greg’s mom.

Turns out Greg hires women on Craigslist to pretend to be his mother when he gets into trouble. And while they were at his house – he finally got to the statue!

And they caught him red-handed!

This being the second season, Rob Lowe and Adam Scott haven’t been added to the show yet. Paul Schneider was still on the show, and no offense, but the show got a million times better when he left and Scott and Lowe came in. They helped the show go from good to great.