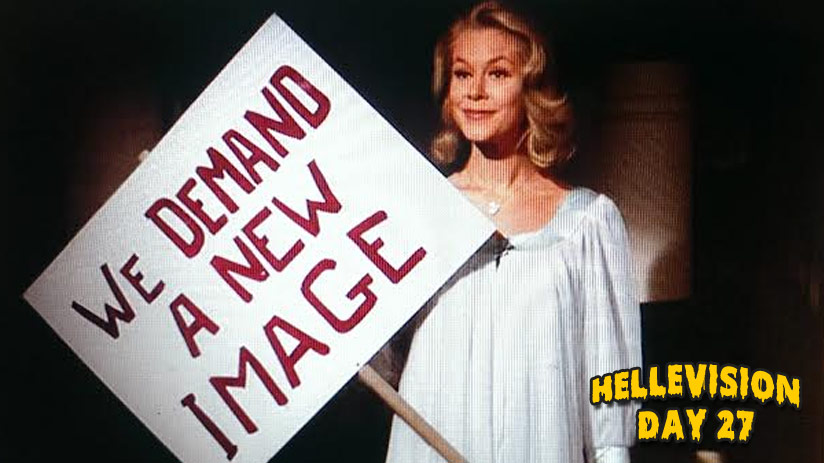 Once again another day late. Well sort’ve. See, I was actually out sick from work yesterday. I spent a lot of extra time with my eyes closed in bed – but I spent a bunch of time with my eyes open in bed as well. When my eyes were open, I watched an episode of Halloween television. But sorry, on a sick day, I’m not going to post about it. So I’m typing as much as I can, whilst on the my phone commuting into Boston today. It’s another HelleVision Creature Double Feature (even though I did watch the show on time) and today’s episode is from the classic television show Bewitched’s first season – The Witches Are Out.

This show was on 13 years before I was even born, but this is another one of those shows that reminds me of my childhood. I guess since there were only so many channels back then, the classic shows were rerun a ton in the 70s and 80s – and I watched a ton of them, including Bewitched!

This was a fun episode. It’s Halloween time and Darrin is in a bit of a pickle. See, Samantha and her witch friends/family hate Halloween because of all the terrible ways witches are portrayed – as nasty, scary, big-nosed, green monsters. Samantha thinks that Darrin, being a good ad man, can come up with a way to help portray witches in a more positive light.

Meanwhile, at work, Darrin has a new ad to work on for a candy, where he is asked to – you guessed it – make a scary, nasty, big-nosed, green monsoon a witch.

And now Darrin is caught between offending his wife or pissing off his client.

I’ll let you watch the episode to see where it goes, but I’ll just say this – when Darrin does try to change the client’s perception of what a witch might look like, it seems like it’s just an excuse for him to draw sexy witches. I’ll let you be the judge.

Until next time… Which will be at lunch today.. .