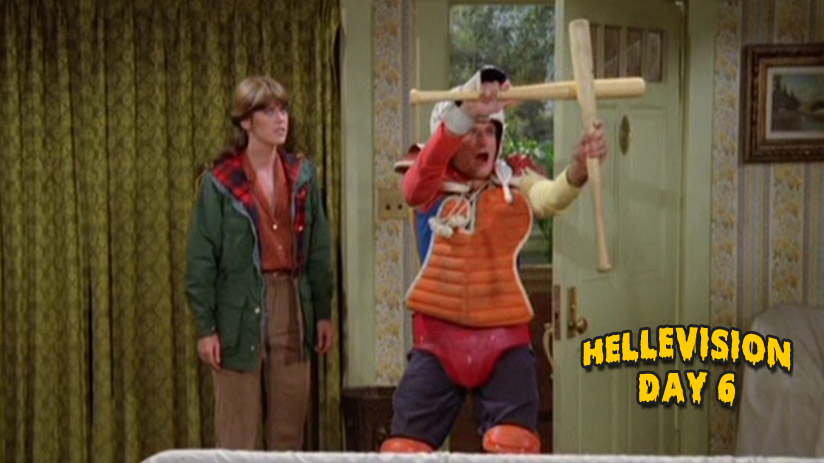 It’s Day 6 of HelleVision and this one I was hoping to do all week! From 1979, today’s Halloween episode is from season 2, episode 8 of Mork and Minday, A Morkville Horror.

It looks like Mindy might be ready to sell her family house, Mr. Bickley, played by the legendary Tom Poston, is interested in it, and Mork has been helping to fix it up. The only thing is – Mork thinks the house is haunted!

He runs into their apartment and hides under a table, freaking out about wind and voices her heard.

Mindy obviously thinks Mork is crazy, the house she grew up in was not haunted. So they went to check it out together.

“GET OUT OF HERE!” They hear a voice – but it sounds like it’s coming from the closet. Turns out it was just crazy old Exidor vacationing in Mindy’s house. They get him to leave, but then….

Then it really seem haunted! Pictures spinning. Lights flickering. Laughing voices! Mork and Mindy run the hell out of their, and of course they find out that the old house was actually in an old book dating back to the 20s. Turns out a murder happened in the house, and two sisters (ancestors of Mindy) then stayed locked up in the house until they died.

But way, they were supposed to meet Mr. Bickley about buying the house – at the house – THE HAUNTED HOUSE!

Boom, the haunting happenes again – and Bickley hightails it out of there! Then, Mork gets possessed by the old sisters’ spirits – and Robin Williams is going wild with crazy lady voices.

Then it just kinda passes. Turns out Mork is sensitive to the spirits. Then all of a sudden Mork gets possessed by Mindy’s mother and starts talking about old Mindy memories. It’s kinda sappy, kinda sweet and just shows how great Robin Williams’ range really was.

This was the first episode with some real Supernatural stuff in it, unless you count the Addams Family. The other shows all have had some sort of real life explanation to them. Not this one. But I guess in a show about an alien, having ghosts isn’t that big of a stretch. Then again, this show is a spin-off of Happy Days, which means in the Happy Days world, ghosts also exist. Hmm….

DID I LAUGH
Of course I did. Mork always made me laugh.

WAS I SCARED.
No, it had some slightly creepy moments, but really just silly.