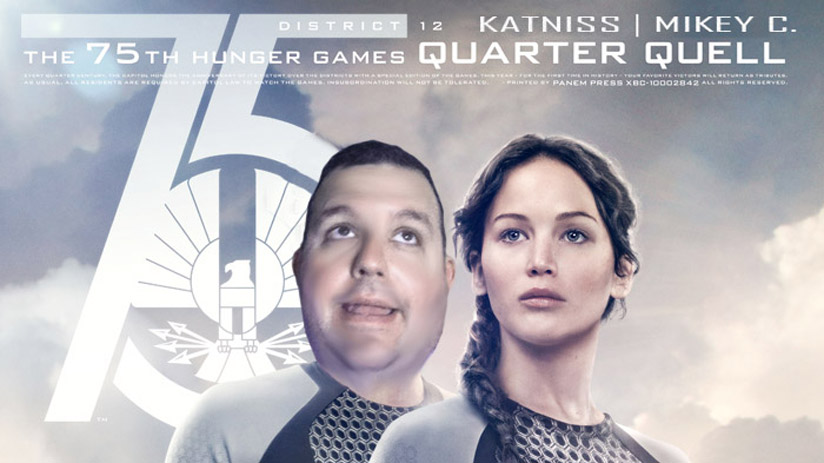 The timing of this Geek Mentality Movie month really couldn’t have been better. My cousin and just gotten married and, because of my participation in the ceremony, I received an Amazon gift card of $50. This was on May 31st.

One June 26th, I’ve rented my last movie through Amazon that will be completely covered by the gift card.

My last free rental, and today’s movie, is 2013’s The Hunger Games: Catching Fire – based on the 2009 “Catching Fire” book, the second in the Hunger Games series. I saw the first one in the theaters, I think on opening night. I read all the books and was looking forward to checking out the film version.

I thought it was good.

I think this was was very good.

Story wise, they’re both written by the same author and in the same style, so I cannot say it’s that the source material got better. I think the filmmakers were just better at the adaption this time around.

Really I think it was the pacing this time around. The movie is over 2 and a half hours long, but I never felt it lagging. In fact I felt like it got to things pretty quickly and moved along at a fairly rapid pace. I think the move from Gary Ross to Francis Lawrence as director is pretty evident in this regard. Lawrence is returning to direct the third book – which of course is the third and fourth movie – you can thank Harry Potter for that new trend.

This is my third Jennifer Lawrence movie this month and it may be my least favorite of the three – but that just shows that she makes good movies. Because I did like this one a lot.

The biggest shame of this was seeing Philip Seymour Hoffman. The character he played was very interesting. Seemingly ruthless without human regard, but so much more. Knowing what I knew from reading the book, it was interesting to watch his role unfoil. And now? I don’t know how much or if any of the next two sequels he was able to film before his death. What a waste.

When it first came out and was advertised, I remember not having a lot of interest in it. I can’t remember why. When I do build that time machine, I will go back and slap some sense into myself…Although if I do ever build a time machine, wouldn’t I remember getting slapped in the face at this point? Dammit.

Anyway, I won’t make that mistake again. This movie certainly acts as the perfect bridge from what was to what shall be, and it got me interested in seeing where it goes…Well, I know where it goes – so really it’s more about how they get there.

With the Girl on Fire…