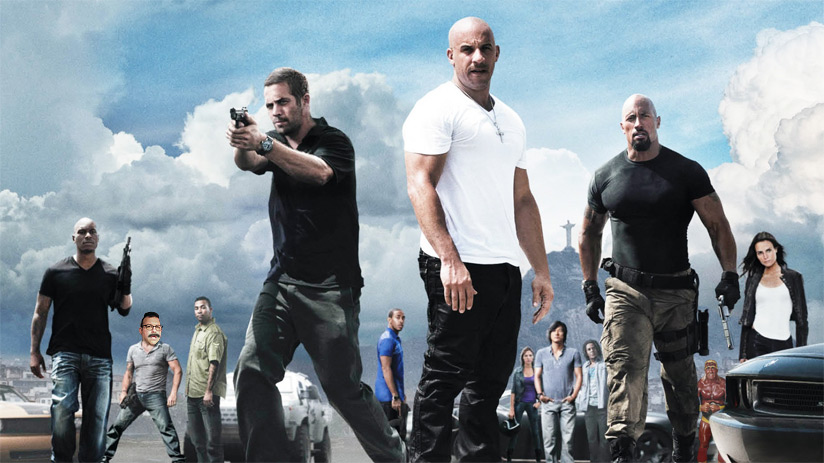 Well, now I can say I’ve officially seen two moves with Tyrese Gibson in it. Yes, since it looks like these movies may never go away I figure it’s high time I watch all of the Fast and Furious movies and what better time to do it when I’m watching a movie every day for a month? So I’ve stuck through some okay and some not okay movies and I finally got to today’s movie – 2011’s Fast Five.

In a series of okay movies with okay acting and some cool action, this one is by far the best of the five I’ve seen. Last time we saw Paul Walker and Vin Diesel reluctantly reunite to take down a druglord (right, he was a druglord?) As the movie ends, Vin Diesel is sentenced to 25 years in prison and the movie ends with Paul Walker and Jordana Brewster and a couple other guys from their crew ready to break him out.

And this movie picks up exactly where that one leaves off.

After breaking Diesel out of jail (you didn’t think they’d fail did you?) they end up hiding out in Brazil. Strapped for cash they end up hooking up with old friend Vince (from the first movie) to pull a job.

Of course the job doesn’t quite go as planned, but already the action is amped up big time with essentially a modern day train robbery. Walker and Diesel wind up taken from the man they were trying to rob – but get away and realize that when they thought they were stealing just cars, they ended up stealing a memory card (I mean, they called it a chip, but it was a flash card wasn’t it?). The “chip” had a list of all the places the bad guy hid his money.

That’s when this turned into an Ocean’s 11-type heist movie. A crew of criminals robbing from true bad guys. And who is in this crew besides the usuals? Well, I already mentioned Tyrese being back, but so is Ludacris, the two hispanic guys from part 4 (forgive me for not knowing their names), Gal “Wonder Woman” Gadot, and even Han! Yes Han! So THIS movie also takes place before Tokyo Drift in the Furiverse (I wish I had made that up, but doesn’t look like it).

Oh and did I forget the mention that the frigging Rock is in this as a super soldier man? He leads a band of other soldiers ready to take down Diesel and Walker. In the meantime, they start their heist by not robbing the first location, but by burning the money very openly in front of henchmen, even showing their faces. The hope is that baddy badman will move all his money and they can track it.

He does. They do.

But where does he move it? A local Delegacia de Polícia. But why would that stop Vin Diesel? He’s Vin Diesel! No the plan goes on as scheduled, but before it goes too far, the most electrifying soldier in all the military barges his way in and they take down the crew. Boom movie over, right?

Turns out the bad guy is so pissed that he has the soldiers vehicles ambushed – of course all of The Rock’s guys are killed (except for a local polícia who has the goo-goo eyes for Diesel). In fact Diesel and Paul Walker help save the Rocks’ life, and in return – he’s going to help them take down Andy Garcia…Wait, I mean – whoever this bad guy is (can you see I’m shit with names?).

Honestly, have you kept up yet – there is a lot going on here.

The final plan/heist ends up being what I think is the best chase scene, maybe the best action scene, that they’ve done in five movies (not counting when Bow Wow was in a fight on the roof of the Tokyo high school). Walker and Diesel, with the help of The Rock and the polícia, hook the giant vault to their cars and drag it right out of there. Then they proceed to wreck the shit out of Rio. Picture two speedboats pulling Andre The Giant tubing. They use the vault as a giant wrecking ball. If this was real life, I’m sure dozens of people would’ve been crushed to death and lives and business ruined while Paul Walker giggles. But this is the movies, so I’m sure everybody was fine.

Either way, this made for a pretty kick-ass chase scene culminating with Vin Diesel basically aiming the vault and using it to fight off cop cars. Ridiculous, sure, but hey it was pretty awesome.

When all is said and done and the bad guys were killed off, The Rock said…It doesn’t MATTER what the Rock said. Oh wait, he’s the Rock, yes it does matter.

Anyway, the Rock gives Diesel and Walker 24 hours, figuring they’ve earned it, but then he’s coming for them. However, the vault stays with him.

And just like Ocean’s 11, there was a second vault that they used for practice. They switched it out when nobody was looking and left the empty one to the Rock. The one filled with $100 million dollars? That was opened up by mechanic turned safe cracker Ludacris. They all be rich now and everybody lives happily ever after.

Then one final scene where – hey there’s Eva Mendes again, working with the Rock – and whoa, guess who is alive that we thought was dead?

I’ve spoiled enough, you’ll have to wait for part 6, which I am sure is coming this way pretty soon.

Everything was bigger in this. The Brazilian scenery was gorgeous. The action was ramped up where there weren’t just car chases – but even the car chases were better than ever. The idea of these movies has changed drastically, and I think for the better. They’ve found their footing on what type of movies these are going forward and if the box office tells me anything it’s that I’ll have a lot more than two more movies to watch.