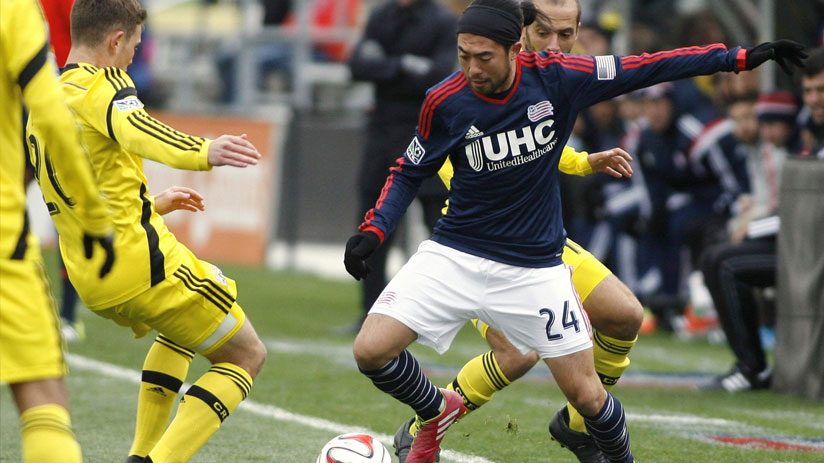 I think I’m soccer fan…Just not a very good one.

I think I blame this game that I played over and over on my Sega Genesis.

It has to be that. because I never played soccer as a kid. I barely knew the rules, and the only soccer player I knew was Pele’

But for some reason, when the MLS was announced and New England was getting their own team – the Revolution, owned by Patriots owner Robert Kraft, I decided I was going to follow them. I want to give my local professional teams support, and this was as big a new professional team as we’ve ever gotten (though I do remember watching Major League Indoor Lacrosse “Boston Blazer” games on tv at some point.)

The Revolution – and the MLS – debuted in 1996. I was 20 years old. I remember there was going to be a fan “rally”  (for lack of a better term) at the local high school in my town. I actually walked to it, and although I was too old to participate in any of the games that were for the younger kids – and even though I didn’t know who Joe-Max Moore was (I’m pretty sure it was him at the meet and greet) I did buy myself a t-shirt that I owned for years (though I think my wife might’ve tossed it recently or turned it into a rag).

I remember watching games (or are they matches?) early on and really getting into them. To this day I still don’t understand the off-sides rule of soccer, but I got the gist of it.

You have to remember, this is 1996 in New England. We hadn’t seen a championship team since the ’86 Celtics. Sure I loved and supported all our teams, but there was definitely room for another sports to take up some of my time.

However, I’m thinking the timing also worked against my fandom, as I was in college without cable television during a big chunk of the season – and the Patriots were finally good again.

Thinks just kind’ve fizzled for me. I didn’t watch much, but I always did check in from time to time, and the times I did watch I always enjoyed it. There’s something relaxing about watching soccer.

Honestly, when I did wear that shirt, I was mostly a fraud. However, it’s never too late to change that, right?

Four years ago I got into the World Cup US Men’s team big time. That transformed into nothing as far as my fandom with the Revolution.

This year I was into the World Cup even more. That transformed into nothing much, but I was interested to see that the Revolution ended up getting Jermaine Jones from the World Cup team.

For some reason I had it in my head that the Revolution weren’t very good this year, but I heard that they did make the playoffs, so that part of me that went and bought a shirt 18 years ago decided I’m going to watch and support the Revs in the playoffs!

Then I forgot – and was happy to read later that they won. I didn’t even know that the goals they scored getting added to a second game, and the total decides who moves on.

However, the Patriots were on the bye this week – and some moving and packing that I thought my wife and I were doing today got handled yesterday, so I made up my mind that I am watching this game!

And I did…okay, I missed the first 20 minutes – but then I watched it! And I was really into it. Sure there isn’t a lot of scoring, but these guys are out there running their asses off just to get a chance.

I was jealous of all the fans at Gillette Stadium chanting and cheering. I wanted to be one of them – someone who was loyal to their Revs, who cheered them on and knew all the players.

That’s not me. Again, I still don’t understand off-sides. But dammit, I was the best fan that I could be on this day and I was very happy for the Revolution and their hard-core fans.

And now, the Revs are moving on to play the New York Red Bulls. I love that there’s a team named after their corporate sponsor – but hey, whatever keeps the game and the team going, right?

Take a step back for a second, forget that it’s soccer and you may not care. There is a series of playoff games coming up (again, 2 games most goals wins) between a team from New England and a team from New York. That has to get you pumped – even slightly, right?

Now the first game is on the 23rd. That is the day I am moving on – and the Pats are playing the Lions that day – but if I can watch this game I certainly will.

I do like soccer and can appreciate the sport. Like I said before, I think I’m even a soccer fan.

Just not a good one.

Bye Week – Now What Do We Do?
2014 Free Agency: What the Fans want and what the Red Sox Want
To Top