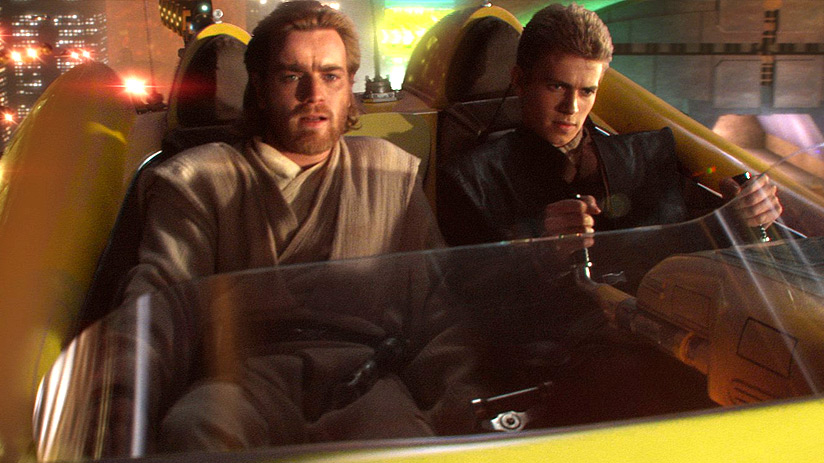 This was the one I was looking forward to the least. The first one – okay that was the return of Star Wars after many years. The last one – we get to see Anakin embrace the Dark Side. This one?

I've got a bad feeling about this. #AttackOfTheClones #StarWars #FNEstarwars

Last night, I watched 2002’s “Star Wars: Episode II – Attack of the Clones” and I lived to tell the tale.

Watching the trailer again after last night – I do admit there were a few things in it that I enjoyed. The overall story of a clone army being built based on a bounty hunter named Jango Fett? That was somewhat enjoyable.

The love story between Hayden Christensen and Natalie Portman? That was pretty terrible. First off all, in this movie Hayden Christensen has the delivery and charisma of a screen door. He seems very wooden in his acting, but it doesn’t help some of the stuff he has to say.

Am I going out on a limb to say that George Lucas writes some terrible dialogue? Also – how in the kriff did Padme fall in love with Anakin? Seriously the progression of the moment they reconnected after 10 years to the end when they get married is laughably non-existent. It just happens.

Look, I’m not going lie – I dozed off a few times watching this, but I rewound it to make sure I watched every moment. And I did. And somehow I’m still here. I made it a goal to watch a Star Wars movie every month starting in July and I kept my promise…to myself cuz who is reading this really?

I was supposed to watch this with my buddy, but we never were able to connect so at the last minute I called an audible and rented this DVD from my library – yes my library, did you expect me to spend money on this??

It’s over, and while there were parts to enjoy – Hayden Christensen and his love story was just terribly terrible.

One more prequel – and finally we can get to the magic.

One thing I want to note – notice the logo for Attack of the Clones:

“Episode II” seems to be the main selling point of the title and the logo. This wasn’t the case in the original trilogy – and based on what we are seeing so far….

It does not appear to be the case for “The Force Awakens.” Why is this important? Well, it isn’t, but for some reason the fact that the prequels stress on being episodes I-III, when for the rest of the movies the actual title was highlighted (I still generally call it Star Wars, not “A New Hope”).

Can you tell I’m grasping at things to write here? This is a good spot to end, so until next time.

May the Force Be With You….(I always want to reply “and also with you”)