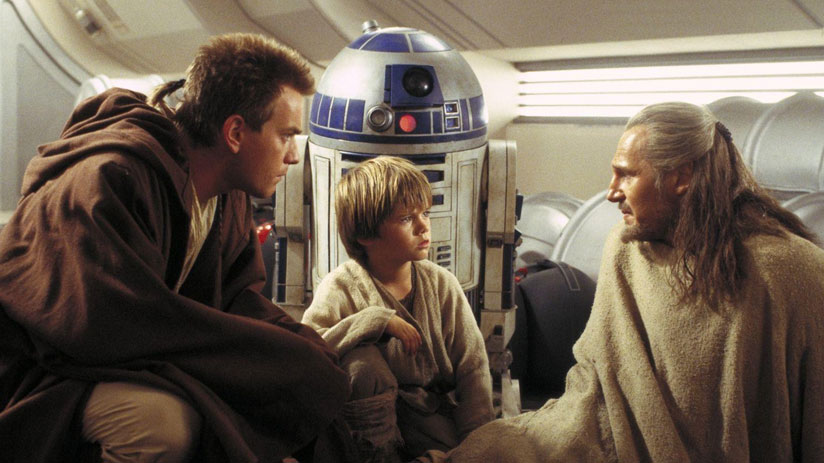 I have not seen this movie since seeing it in the theater sixteen years ago back in 1999. I remember not seeing it right away because I was too busy graduating college and starting my first job – that I’m still doing today.

I actually went with my fiance to see this. And she still married me.

That was my first viewing of The Phantom Menace. Last night was my second.

We ended up watching it through Amazon (after signing my buddy up for an amazon account, buying it with his credit card, hooking his TV up to his WiFi, and syncing his amazon account with the TV. Only took about 10 minutes tops). I think he has a 4k TV, and right away I was impressed with how nice and sharp the movie looked.

That feeling didn’t last too long because when you watch a movie with a lot of digital effects – 16 year old digital effects – on a TV like this, the sharpness of the picture actually exposes the limitations of the time that probably looked great even in theaters in 1999.

Now, on this TV it looked like I was watching a scenes from a video game. I’m not gonna lie, noticing those moments took me out of the movie a bit.

Another thing that took me out of the movie was the fact that I wasn’t watching it alone. Watching it with my friend, we’d crack jokes and talk a little, and the movie would keep playing. I’d be like, “Wait, why are they here?” or more commonly, “What is happening right now?” if I watching this alone I would have listened better and the little details wouldn’t have gone over my head as they did.

See I didn’t just watch this with my buddy, but also with his 10 year old son. The kid is not really into Star Wars – another reason we’re doing this is to hopefully get him more into it – but even still with that fact and with the fact that he’s never seen this movie before – he still knew more about stuff going on than I did – thanks to his lego video games.

The biggest distraction was these simply amazing Nerf guns this kid had. Remember when we were kids and Nerf only made footballs and tiny basketball hoops? Now they’re basically a weapons manufacturer. I saw the kid earlier in the day and he asked me if we could play Nerf guns when we got together last night.

How could I say no?

You’re right I couldn’t. So at various moments throughout the movie I’m only paying half attention. My other half was focused on shooting this young lady with foam darts. We’d switch weapons back and forth so I’d either have the sniper or the automatic machine gun. And I did not hold back on this kid.

Who proceeded to destroy me each time. I died so much you’d think I was in a Tom Cruise movie.

When not distracting myself and striking the famous Platoon pose in the middle of the living room, I was still watching Episode 1. It happened. I was there. And there was stuff I liked:

But that’s it. July is done. Phantom Menace is done. One movie down. Five to go…And out of all six movies, I think this next one is the one I am looking forward to the least – the one I didn’t even bother seeing in the theater – the one that gave us a new actor playing Anakin Skywalker….Attack of the Clones.

Until we meet again, may The Force be with you.

The Star Wars Rewatch Begins Tonight!
I Survived An Attack of the Clones
To Top