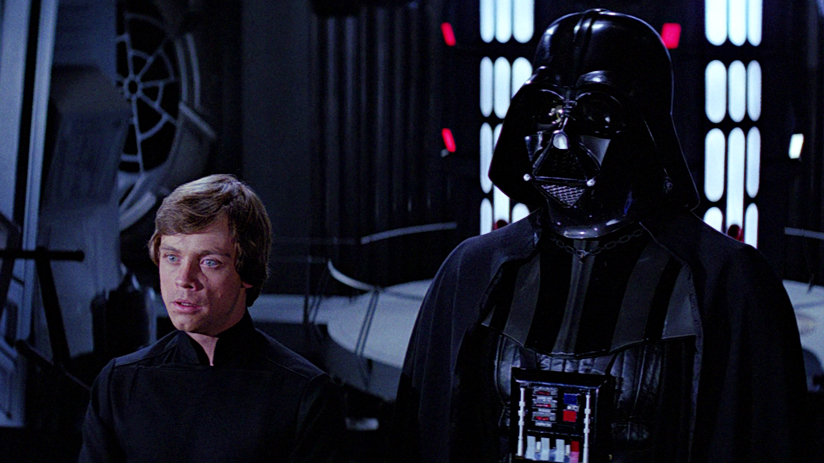 Today, I finished the Star Wars Rewatch with my viewing of Return of the Jedi (1983).

This one always seems to be referred to as the weakest of the original trilogy. I mean, okay maybe it is – but this is the one that has the most sentimental meaning personally to me, so it’s always going to have a special place in my heart. Rewatching this reminds of why, when I was a kid this was my favorite one.

I think it’s partly because I was a little kid, probably not even 7 years old, when my dad took my brother and I to see this in the theaters – and this was the first one that I saw IN the theaters. Okay, and being a young kid I probably really liked the fact that there were these Ewok characters. And I loved everything about Jabba’s palace. I remember playing over a friends house in his back yard and he had this awesome Jabba playset.

Can you imagine the annoying people today that would be complaining about a toy that was promoting smoking. Life was so much simpler in 1983.

But as you can see, for us kids of the 80s, this was the last Star Wars movie we thought we’d ever see, and this was the one that stuck with a lot of us the most – at least me.

So I can say that I thoroughly enjoyed watching this again.

Unfortunaly, the DVD I watched was of an updated version that changed a lot of little unnecessary things. I am sure a lot of it I missed, but some effects looked too good for 1983. Some music – some really classic music – was changed, and of course another “Nooo!” from Darth Vader was just not needed nor welcomed.

But if you look past that, it was still that movie I loved back in 1983. However, if you don’t want to look past that, here is a cool video going over EVERY change from the different versions of Return of the Jedi.

The most glaring change comes at the very end when Luke sees the ghosts of Yoda and Obi-Wan being joined by his father. Originally we saw actor Sebastian Shaw as Anakin Skywalker – the same actor who played Darth Vader unmasked.

However, in 2006 when the movies first came out on DVD, George Lucas changed this scene so that Anakin was played by the prequels’ Hayden Christensen (this was not long after Revenge of the Sith came out, so I assume they just filmed this during that time).

In a way, I get it. What we are seeing is a representation of Anakin Skywalker as he was a Jedi. Everything after that, Anakin was gone and replaced by Darth Vader. So just like Obi-Wan told Luke that his father was dead, here we see that on display.

Shit I’m such a nerd.

Look, in the long run – the most important thing that we can’t forget is – I watched all six movies just like I said I would. Sure watching 6 movies over 6 months isn’t as hard as 30 movies in 30 days, but it wasn’t all that easy either. You can’t just run down to Blockbuster video and rent these. Nevertheless, I took care of business.

Can you imagine being a super fan of these movies when they first came out? You see all three of them and then – poof- they’re done. No more movies. I was such a young kid that by the time I was in second grade the movies were already done. But what if I was in High School and a super geek for these movies, and they were all done. Like all the series’ we see today – seeing that last one hurts a little because you don’t get to watch the characters you love anymore.

Then imagine being those megafans and finding out that there will indeed by 3 more movies! And you get to see how Darth Vader came to be!

By the time the prequels came out, I was out of college and so ready to see new Star Wars!

And then I watched them. Well, we all know where that went.

So AGAIN we have three movies, catching us up to the original trilogy. And AGAIN we’re done with Star Wars, right? The old actors are just that – old. They’ll never do another Star Wars again! Right?

So I was happy to watch all six Star Wars movies (I don’t include the Clone Wars cartoon, sorry.)

The “REWATCH” is complete. Starting tomorrow, it’s just all about getting to once again experience a part of Star Wars for the first time.

My Force is fully awakened. For tomorrow, the Jedi will return. Until then….May the Force be with you.

I Just Watched The Empire Strikes Back And The Biggest Moment Of The Movie Gets Ruined If You Watch The Prequels First
Geek Mentality and the “Star Wars: The Last Jedi” Instant Review
To Top