My cousin Joe turned me on to Chaotic Wrestling years ago and I’ve been in love with it ever since. I remember years ago when old timers and local jobbers came to my high school to put on a show that they probably put on every night all over the east coast. Chaotic is nothing like that. They are an honest to goodness promotion. Going to see a Chaotic show to me is like seeing a taping of Raw. They have the music, the vignettes, the feuds and the story lines. They do it all, just on a much smaller scale.

They’ve had some very recognizable names who got their start there including current WWE Superstars Kofi Kingston (back when he still had an accent), Damien Sandow, and Darren Young. I’m not sure if he’s still affiliated with them, but there used to be guy named “Johnny Fabulous” who did commentary for their videos – who was none other than John Cena, Sr – and the current WWE Champion has made an appearance himself.

The last time I went, we also saw two folks on their roster wrestle their final Chaotic matches, as they were heading to WWE…Or actually heading to NXT….

One of the names is a guy who has been there for years – Max Bauer, who is now known in NXT as Axl Keegan. The other, who I thought had a horrible match that night, is a female wrestler named Mercedes KV – I guess she has the look.

Years ago we would go see them in my home town of Methuen, MA, but more recently we drive up to Lowell to the Polish American Veterans Club to see their shows.

It’s wrestling in an intimate setting – there are only a few rows of chairs surrounding the ring and the fans are hardcore loyalists. I’ve seen everything from kids laughing and screaming, to a 300 lb. woman pull her bra out of her sleeve and swing in the air – admittedly, that was years ago.

But some things…You just can’t unsee.

As I mentioned before, they do tape all of their shows for DVD and for YouTube, and if you look close at this video clip – you’ll see me and my cousin.

Okay, admittedly, you have no idea what I look like – so let me make it easier for you. I’m the guy on the left. 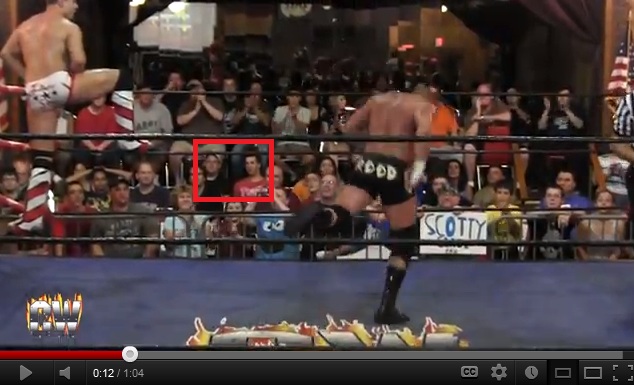 THE CHAMP IS HERE!
Happy 75th Birthday Superman
To Top