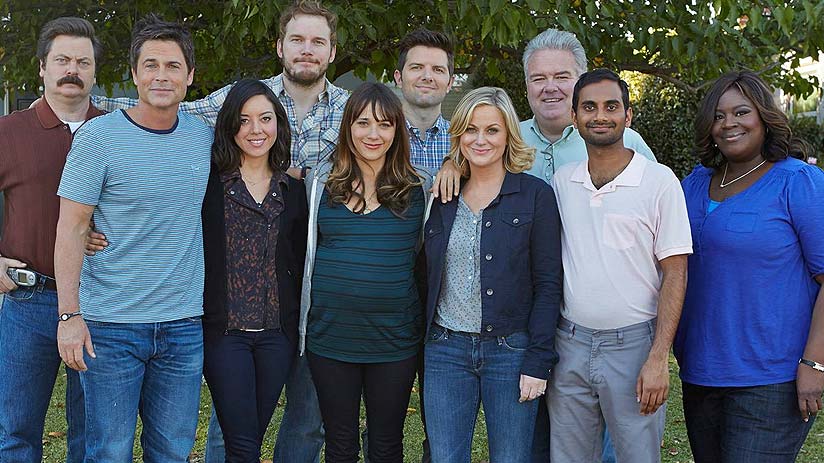 Parks and Recreation is one of those shows that I knew of but didn’t watch. At first I thought it was a spin-off of The Office. Then I thought it was basically an Office copy – where the characters are aware of the cameras and even talk to the camera. Now, that is basically a genre, but at the time I didn’t think of it as one.

It wasn’t until a co-worker made me feel like I was missing out on this show that I decided to give it a try. I was still getting Netflix DVDs in the mail (or what is Qwikster at that point?) and I finally decided to add season one into my queue. I remember hearing on some podcast to not judge the show on it’s first season. I’ve even heard people say you can skip the first season, but being the completionist I am, if I’m going to watch a show I’m going to start at Episode 101 (that’s TV talk for Season 1, Episode 1). And I did. And I liked it.

But I can honestly say that it wasn’t until the second season that I fell in love with the show. That was the season the show really found it’s stride and took off. The character of Mark was gone (thank God) and the characters of Ben and Chris were added in (double thank God). And it just took off from there.

The thing I really loved about this show was that the fictional town of Pawnee really became a character. This show basically built a world of it’s own – like it’s very own Springfield, only we know what state Pawnee is in. Besides the main cast of regulars, its the reoccurring casts of dozens of people that really helped shape a very real, very strange world for our main cast to live in.

But the entire show – the entire cast of crazy characters – the entire world – is anchored by Amy Poehler and her character, the eternal optimist Leslie Knope.

It’s almost impossible to watch Poehler’s performance and not instantly fall in love with the Leslie Knope. The amazing go-getter, always on, always positive. You can’t help but just root for her and want her to succeed. And even with all that, she can still be just as much a prick to Jerry/Larry/Terry/Garry as anybody else – and you love for it.

Leslie loves life. Loves Pawnee – and loves Government. It’s that last part that seems to get on her supervisor’s nerves.

The man. The myth. The legend. Ron F**king Swanson. If Leslie Knope is the anchor of the show then Ron Swanson is the one who forged that anchor out of steel he smelted in his workshop (address unknown). Nick Offerman plays Ron Swanson (and it seems like Ron is almost an exaggeration of Offerman in real life). At first I thought he was the straight man – the one normal character that was surrounded by all the crazies – but Ron Swanson emerged as easily my favorite character on the show. Well at least in the top 3. There’s Leslie. There’s Ron. And there’s Bert Macklin.

Going back to that first season again – I thought he was kind’ve a jerk. He was Anne’s clueless boyfriend who did nothing all day. Damn that first season! This guy is no jerk! He’s the super kind, loveable idiot! He’s the love of April’s life! He’s the lead singer of Mouserat! Long before he was guarding galaxies or dinosaur parks, Chris Pratt was everybody’s favorite goofball Andy Dwyer.

If you think of Parks and Recreation as a family, Leslie would be the mom. Ron would be the dad. Andy would definitely be the son that never grew up – and didn’t even know that was an option. I know everybody – EVERYBODY – in the cast is great and perfect. But it’s these three, to me the holy trinity of Parks and Rec, that are the glue of this show and the main reason why I fell in love with it. The very reason it never sits on my DVR waiting to be watched.

The very reason I’ll be sad at 11pm tonight.

I am a big fan of television. A big watcher of television. I get invested in the shows I watch – okay not all of them, but the ones I love I really love. And when the ones I love go away, I can’t help but get sad. I’m never going to see new adventures with these characters. I mean, I do have a life. I do have an actual human wife and human friends – but I still have this weird connection to characters that I follow, whether on television shows, comic books, or books without pictures. And when they go away I can’t help but feel this small (strange and unhealthy I’m sure ) depression. But of course, I have to care about the characters and the stories. And to the residents of Pawnee, Indiana – I do care and you will be missed.

We’re about an hour away from the final goodbye. Thanks for laughs.

One Episode in on “Better Call Saul” and I’m Already Hooked
“The Last Man on Earth” is Great!
To Top