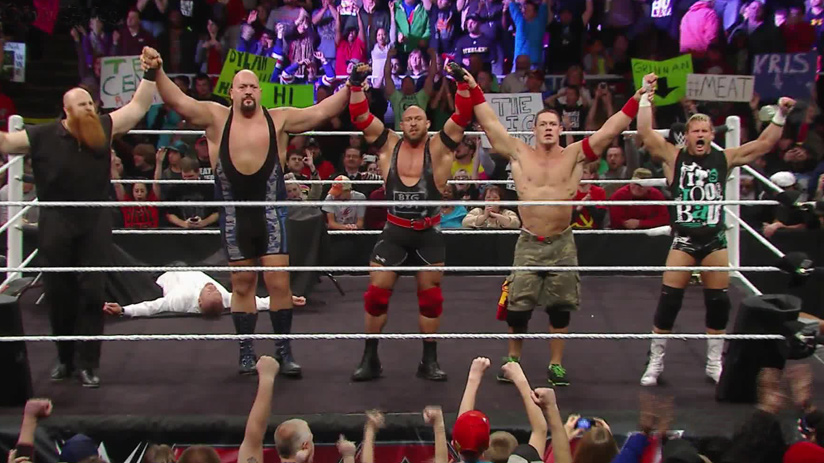 Anyway, where was I? Oh right, so I reached out to a few of the Fans (namely my brother Shaun and my cousins Joe and Brandon) to get their predictions on this upcoming professional wrestling extravaganza. Here is what they, and I, had to say.

Where the hell has this dancing fool been? Seriously? I think I heard he’s been doing some house shows, but he’s been off TV for quite some time. And they dig him up to bring him back for one of the “Big Four” PPVs? Sure it’s on the free pre-show, but hell isn’t the whole thing free for some folks anyway? And they have him billed as fighting….TBA?

We all think Fandango is going to lose. We just all care more about by whom (it’s “whom” right?)

What timing. As I write this I am watching the first Survivor Series – and the “Woman’s Elimination Match” just started. “Women” is what we used to call Divas. The Fabulous Moolah and Sherri alone makes this match from 28 years much more interesting than this divas match.

If this match doesn’t open the actual show I’ll be shocked. Or is it annoyed?

Alicia Fox is a face? When did that happen? Probably during my bathroom breaks at RAW. The Fans just don’t care about this match. Do you?

Gold and Stardust vs. The Usos vs. Los Matadores vs. The Miz and Damien Mizdow

This could be a fun one, and it’s for the tag belts. I’ve become a little bored of the Usos over the past few months, and Los Matadores have never done much for me (except make me reminisce about the 80s). The Rhodes brothers always put on a great match, but we all know that Damien “Mizdow” will steal the show.

I think Joe and I are the only ones who realize this is just a fatal-four-way tag match and not a Survivor Series match. But, we all are basically in agreement.

Much like some war that was fought in this country at some time in the past, brothers are on opposite sides. While me and Brandon (I’ll call us “Team Handsome”) think that hell on Earth will be upon us as Nikki Bella is crowned Divas Champion. Shaun and Joe (we’ll just call them “Team Older Brother”) think that AJ will retain. I hope they’re right.

I’m choosing to ignore the Fandango match, or just say “well that’s part of the preshow,” so that I can say that this is the only (non-Divas) singles match of the night. Where almost every other match has match has some sort of gimmick behind it – this one just has two guys who can kill it on the mic and in the ring.

To be honest, I haven’t really been feeling this rivalry all that much, maybe because it is so new – but I have a feeling this could be match of the night. These guys are a huge part of the “now” and possibly the next 10 years of this company – and they could go a long way of showing that tonight.

Everybody but Shaun thinks Wyatt is going to win, and that’s only because my brother has an Ambrose poster on the wall in his office. That is a lie.

In television, a lot of shows have a main storyline “The A Story” and a secondary storyline “The B Story” and sometimes maybe even tertiary storyline “The C Story.” For WWE, this has been the main “A” storyline – actually it’s more like the A, B, and C story. This is the one they spent the most time building. All the other matches and feuds take a back seat to this one. If Team Cena wins, the “Authority” loses power – and, as announced on Smackdown, if Team Authority wins – everybody on Team Cena – except Cena – will lose their job.

Interesting – well at least they added more motivation for Team Cena to win – and both teams have consequences if they lose.

Everybody thinks Team Cena will win…Except me. I think there’s a better chance that neither team wins than there is of Team Cena winning.

So there you have it. The first ever “The Fans Pick The PPV.” I hope there are a lot of eyes on it tomorrow night. I hope that a lot of people tune in and check out the network for free and end up signing up – because the more people subscribed, the better I think the product can be.

If you are NOT signed up yet, it’s free for the rest of the month. Go on over to http://network.wwe.com and just do it. If you don’t like it, cancel it (there’s no longer that 6 month contract deal).

Last year at this time, my brother and I actually went to the Survivor Series at the TD Garden. The show was underwhelming, but it was still fun to see a live WWE event. And it was still fun to see one of the “Big Four” PPVs, a first for me (big brother Shaun, and Joe and Brandon, did go to Wrestlemania 29). But no matter how “okay” that show was – no matter how good tonight’s show could be. There will never.

And I mean EEEEVER – be a Survivor Series team as epic as this one.

I Love The WWE, But I Saw The Match of The Year Last Night in Lowell, MA at Chaotic Wrestling!
To Top