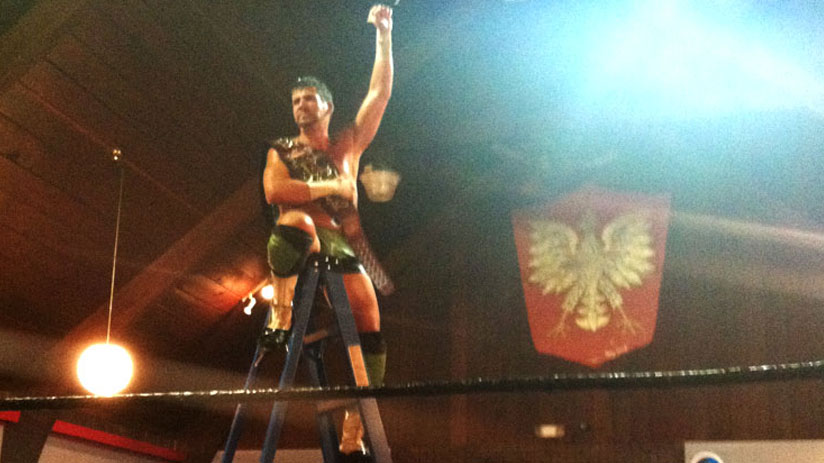 I am a big WWE fan. I look forward to sitting at my computer on Monday Nights and watching RAW while trying to tweet as many one-liners as possible.

Seriously. Wrestling actually makes me look forward to Mondays. And tomorrow night, I’ll be watching Battleground on the WWE Network and…well, doing the same thing. I am sure there will be some very good matches and some great wrestling.

But for my money – I believe that I saw the match of the year already.

And it happened last night in Lowell, MA.

They have everything. This promotion, where some notable names such as Kofi Kingston. Darren Young, and Damien Sandow worked early on in their careers, does everything the big boys…well big boy…does, just on a smaller more intimate level.

John Cena Sr? Yeah, I knew him first as Johnny Fabulous when I first saw Chaotic Wrestling about 10 years ago.

Since that time, I’ve been going a couple times a year and have thoroughly enjoyed myself each and every time

My brother turned 40 last November. He’s a big WWE fan as well, so for his gift I thought it would be fun to go see Survivor Series at the TD Garden. I couldn’t afford great seats, so we sat up near the top…but it only cost me $55…for each ticket that is.

Last night, I sat in the first row. The ticket was $12. And by far I saw a match that was seriously far superior than anything I saw on that Sunday night in November.

In fact, my cousin @NHPunk (follow him – he’s @WrestleBrand‘s older/wiser brother) and I think this was the match of the year.

And it was a ladder match.

The champion was “The Remarkable” Adam Booker. The challenger, and clear an favorite, was Chase Del Monte.

Here’s the promo we saw right before the match started.

These guys started beating the hell out of each other early. And often. Things got pretty crazy even before the ladders were introduced.

Yes, that was my view last night. Awesome.

Once the ladders were introduced things got pretty crazy, pretty fast.

As you can see from the picture above, Del Monte through Booker into a ladder and he flipped up and over it onto the floor below. Sure there’s a matt there, but trust me it’s not that thick. And while Booker didn’t get the powerbomb outside the right to work. He did get it to work from the top of one ladder…Onto another ladder. Which left Del Monte…well, looking like this.

That might’ve been around the time the first “Holy Sh*t!” chants were spattering about the room. I din’t get pictures of everything unfortunately. I missed the chance to video when one of the guys put the ladder over the head of the other guys – I think Del Monte was the victim – and basically attempt to remove his head. I wasn’t able to see when they outside the ring on the opposite side. I saw parts of bodies flying. Heard ladders smashing into something – and let the crowd’s reaction fill in the rest.

At one point both guys were trading punches while each atop their own ladder. And forgive me if I get the details wrong, then Del Monte took Booker down with a DDT.

From the top of the ladder.

That was the first time I was on my feet for this match.

And the “Holy Sh*t!” chants grew – unless you were over with the kids who were chanting “Holy Crap!” with their dads.

The match continued it’s crazy pace. The ladders were flying around – and bouncing on a very lively ring. Excitement and anxiousness filled as we knew we were nearing the end of the match. After trading a few offensive moves, Booker (I believe it was him) set it up so one ladder was suspended between the other ladder and the ring corner.

Del Monte reversed whatever move Booker had planned and then…

A freakin’ PILEDRIVER. While standing on a freakin’ LADDER.

Check any ladder manufacturer’s instructions. This is not was these things are supposed to do.

That takes balls. And that takes a hell of a lot of trust on both guy’s part.

At this point I am now out of my seat. Everybody is. And the “Holy Sh*t!” chants have taken over. Sure I can somewhat make out the “craps” from the kids – but just barely.

After this, the match was Del Monte’s. He easily climbed the ladder (the one he did just piledrive a guy’s head into) and once again became Chaotic Wrestling’s New England Champion.

As the crowd cheered, Del Monte came around for high-five’s usings the belt (yes even me) before giving a final salute and heading backstage. His opponent, still lying there – getting checked on by some of the crew.

That was when the chants turned to “Adam Booker!” The whole match the crowd was against him, but they all knew what he put his body through just then, and this was their way of saying thank you.

These guys don’t travel in jets. They don’t (yet) fight in big arenas all over the globe. They do it because they love professional wrestling, and want to work their asses off so that someday they can live that dream.

There are guys making big bucks who would not – and could not – put their bodies through what these guys did to deliver for for a small crowd in Lowell, MA.

Match of the year!

The Fans Make Their Survivor Series Predictions
To Top