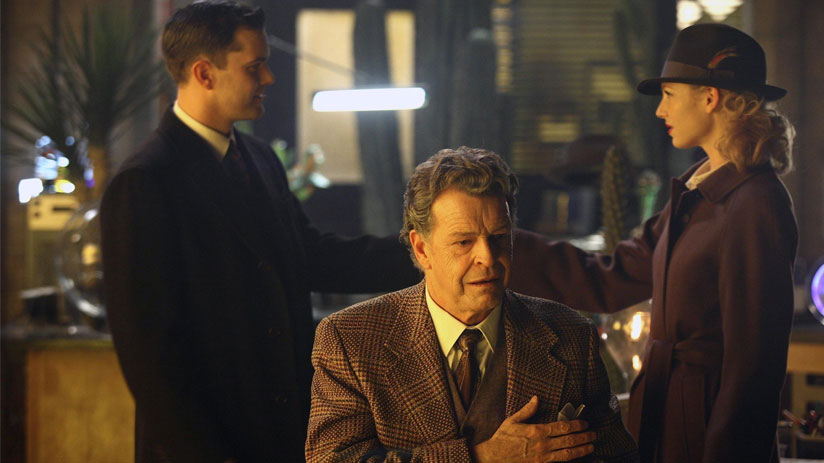 This past Thursday, I was under the impression that we were going to see a “Musical Episode” of Fringe. To be honest, it made me a bit nervous that a show this young was resorting to a gimmicky type episode. In reality it looks as if this was network mandated as part of “Fox Rocks” – which itself is both gimmicky and cheesy.

But, I was extremely happy to see that Fringe took a different approach to things, as I was hoping they would.

This was an episode that had a couple of musical moments. Broyles at the piano, Astrid singing a bit at a job interview, Dunham singing to an unconscious Peter, and three corpses singing “The Candyman” in Walter’s office.

And I think that was it.

No, this really wasn’t a musical episode as much as it was a Fairy Tale episode. Walter Bishop was asked by Olivia’s niece, Ella, to tell her a story. Being that he was extremely high on some hybrid weed-type drug he called “Brown Betty” – he told a story both fantastic and yet an allegory to what was really going on in Walter’s mind.

The jist of the fairy tale story was that Peter Bishop stole Walter Bishop’s (no relation) glass heart after he found out the experiments he was doing on children. The glass heart is what kept Walter alive, but Peter also needed it to keep him alive. In the end Olivia gets Peter to confront Walter, but Peter is not convinced that Walter has changed and leaves again, for good, with the heart.

Wait, that is how Walter saw the tragic story ending. Ella, on the other hand, believes that fairy tales must end in a happy way. She retold the ending with Peter forgiving Walter, and splitting the glass heart in half so they could share it and both live happily ever after.

This episode didn’t do anything to progress the Fringe storyline (FT) really, except for the fact that Peter is still missing and Olivia hasn’t been able to track him down.

The fairy tale storyline (FST) was a great way for Walter to express how he felt. First, I like how in the FST he says that Peter and Walter have the same last name but are not related. That is a nice reference to the fact that in the FT, the Peter Bishop we know is really the son of the Walternate (man on the bridge?) and not the Walter we know.

Walter expressed through the FST that Peter finding the truth and leaving stole his heart – a great reference to the fact that Walter in the FT is broken hearted without Peter.

This is television, so at some point we are sure to see Walter and Peter back together and working cases again, but for now I thought episode was a great way to veer off of the FT without totally ignoring it.

Musical episode? Hardly. Really well done episode that looks like it was a blast to make?

P.P.S. Sorry this was a day later than I originally promised on Twitter.