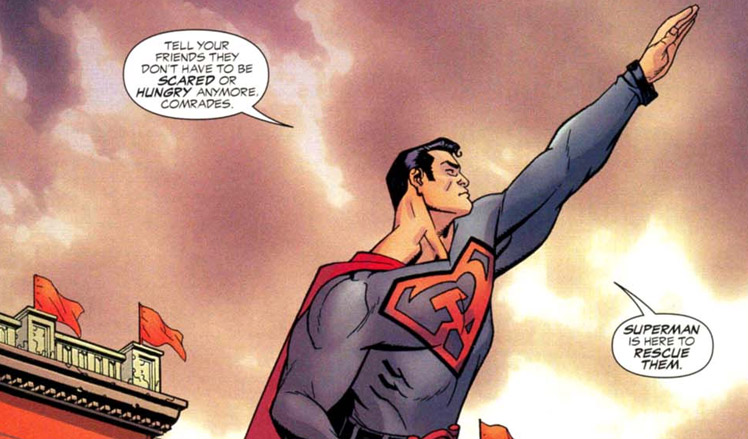 Have you ever asked the question, “what if the most iconic American Superhero landed in Soviet Russia?” Well, even if you haven’t – Mark Millar has given you an answer in this amazing mini-series, Superman: Red Son.

I’m not sure how many times I’ve said it – but I am still relatively new in the world of reading comic books, so I love when I get a chance to start a series from the beginning – or in the case of Superman: Red Son, get to read a miniseries based on popular characters that is outside of canon and can be enjoyed as its own entity.

I heard about this book a couple years ago and thought it sounded like a fun idea.

The Superman we know and love grew up with the love and support of the Jonathan and Martha Kent. They nurtured him and taught him the values that he holds true his entire life.

But what if he didn’t land there? What if he his spaceship to a left turn at somepoint and veered off the course we all thought it was meant to take? It’s the ultimate superhero tale of nature over nuture.

In reality, a story like this could have taken place anywhere. What if he landed in Los Angeles (damn Lakers)? What if it was in New Jersey? Hawaii? Australia? Iraq?

Each place would bring upon itself a different set of circumstances that would lead to a very different Man of Steel.

But set the story in the Cold War 1950s and have the Last Son of Krypton land in Soviet Russia, and the possibilities of “What if?” are almost limitless.

And giving a story limits is not how writer Mark Millar seems to work.

I seem to have been on Millar binge recently. I just read Kick-Ass and a couple months ago I read Wanted. Now, with Superman: Red Son, I’ve been able to read three great Millar stories each in one volume collections (I feel bad for those who had to wait for the next issue – but I’m with you now on a few series).

I don’t want to say too much without giving things away, but Millar does a great job of rewriting history as to how it could have been if baby Kal-El wasn’t a hero of America, but a staunch believer in Communism and a tool of the Soviets to bring most of the world to their knees.

Millar did a great job of weaving in characters from the Superman mythos and the DCU – but tweaking them just a bit so that they aren’t exactly how you think you know them.

In all of this, there is one thing that remains true – Superman (and yes Russia indeed calls him Superman) thinks that he is doing the right thing for the right reasons.

He believes he is saving his people and the world by impressing upon them the Communist beliefs that he learned from Josef Stalin himself.

In this world and in the more familiar Superman world one thing remains – he is trying to be a hero.

In the case of SRS – he is trying to be a hero whether you want it or not – because it is right and it is for the good of the people.

And he is watching you. P.S. I can’t mention enough how much I liked this book – and a lot of it has to do with the great art of Dave Johnson and Kilian Plunkett. They really seemed to capture the times this story was written in to make it almost a “period piece” in both look and story.