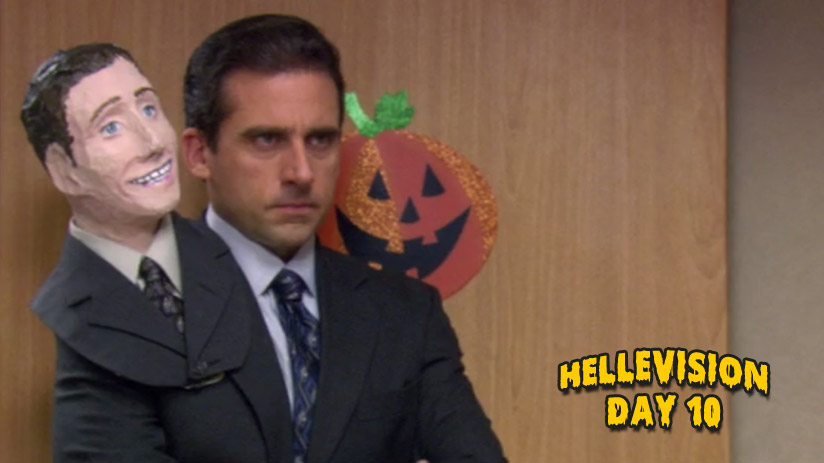 Happy Saturday night everybody. It’s day 10 of HelleVision and I’m typing this on my tablet while my wife and I are staying up at our friend’s house in Madison, NH. But that’s not going to stop me from missing a day again! Nope. It’s pretty quiet and some of us are trying to stay up for SNL, so I thought I’d do a quick post on today’s show, “Halloween” from the second season of The Office.

This episode makes me miss this show. Just some classic Michael Scott moments. It’s Halloween and Michael was tasked with having to fire somebody by the end of the day – but of course he hasn’t brought himself to do it and wishes there was a way to do it while still being that person’s friend.

Because we all know that is what Michael Scott cares most about – these people thinking of him as a real friend. Meanwhile Jim and Pam play a prank on Dwight by sending his resume, that they made up, out for various jobs, hoping maybe that he’ll take one and be gone from their office.

Of course he doesn’t but Pam thinks one of those jobs, in Rhode Island, would be perfect for Jim. Of course that somewhat bothers jim thinking that Pam wouldn’t care if he leaves. They make up by the end of the episode and we see some of those early sparks in the Jim/Pam romance that became such a big part of the show in future seasons.

As far as a Halloween episode, besides costumes and the talk of a Halloween party after work, there really wasn’t an overall Halloween theme. It was more of a backdrop.

Did I Laugh?
Absolutely. Some great clueless Michael Scott moments.

Was I Scared
Nope. Not at all. Wasn’t that type of show.

This might be the first post I’ve done for this site typed completely on my little Samsung Galaxy tablet. I started it a few hours ago but am finishing up now that mostly everybody is asleep. I’m next in line.
Until tomorrow….