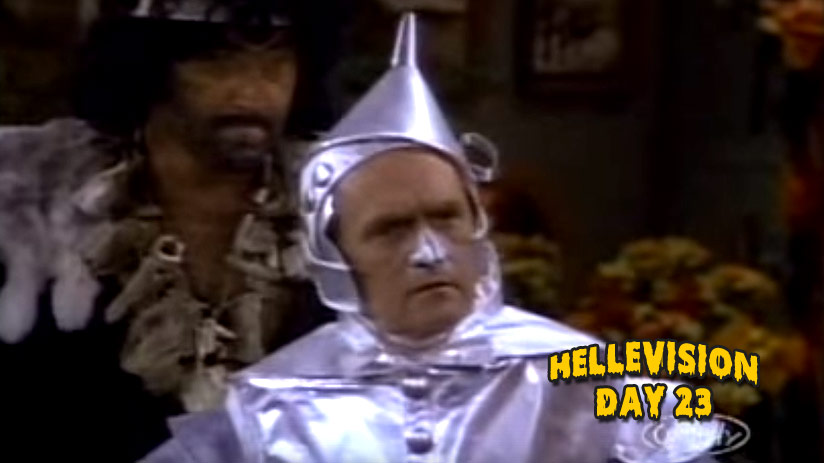 When I was a kid, Newhart always made me laugh. I wasn’t a regular watcher of it, though. It wasn’t a show that really appealed a kid even though it was funny and I always remember enjoying it. With that said, the theme song really takes me back and makes me feel like that same little kid. I was 11 years old in 1987, when – in the sixth season – they had a Halloween episode of their own entitled, Take Me to Your Loudon.

It’s Halloween time at the Stratford Inn! Good ol’ George is already getting in the spirit by wearing his Cowardly Lion mane early on in the day. After a brief discussion, he, Joanna, and Stephanie talk Dick into throwing a costume party that night. Dick really isn’t into it, but he begrudgingly agrees.

As it turns out Michael, who runs the local television channel, is running War of the Worlds tonight – and wouldn’t you know it, but that small town of Vermonters start to worry as one man thinks it’s actually a newscast. Panic spreads pretty quickly that aliens are coming to invade them – and at one point it almost looks like they are invading. The lights go out, and six bright balls of light fill the air!

Ah, it turns out there were no aliens after all. Who would’ve guessed it!

This episode had a lot of laughs in it, mainly because Bob Newhart is a comic genius and he surrounded himself with a strong, strong cast of characters. It’s no wonder this show is legendary, and who’s finale as been called the best series finale ever.

To me, even with all the laughs, it just reminds me of being a kid – and for some reason, hanging out with my grandparents, watching it with them on sleepovers or when we stayed at the beach with them. These old shows always make me think of times past.

What a way to end of a downer. Good going Mike…