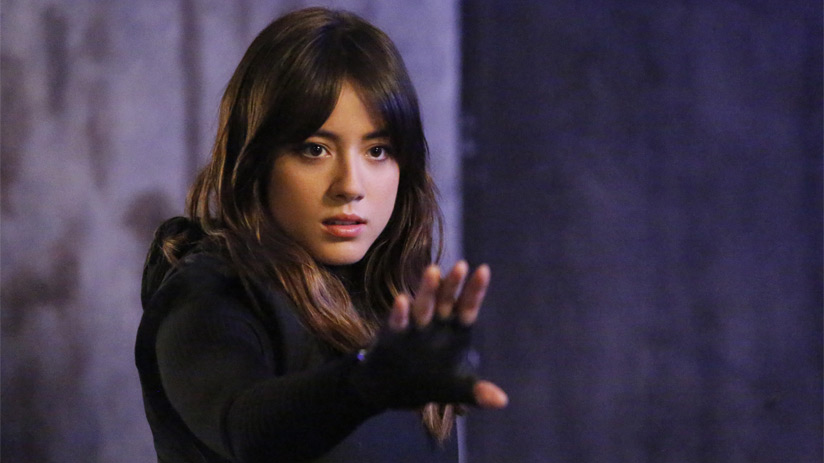 It takes a lot for me to give up on a show, and it really doesn’t happen that often. Sure, I still haven’t watched the latest seasons of Homeland and House of Cards, and I still have a season-and-a-half left in Boardwalk Empire – but those are shows I fully intend to catch up on.

There are shows like Once Upon a Time where for weeks I ask myself, “Why do I watch this?” and then something eventually happens that I enjoy enough to bring my back. One show where that didn’t happen was Glee.

Yes, I watched Glee. For years. It started out as this fun/funny show – and I suckered me in with some Journey songs, I’m not going to lie – I loved the pilot episode. I watched it and enjoyed it for a while, but somewhere along the way something changed. The show was becoming much less enjoyable to me, and the story lines started to feel much more dumb. They graduated high school, and yet I was still watching. A show. About a high school glee club. Where most of the stars graduated.

It was somewhere in that season, maybe even the end I don’t know, where I sat there, like Jerry Seinfeld at the pier, and thought really long and hard about it. I don’t care about this show. I don’t like this show. I’m going to stop watching this show.

Wait, can I do that?

I’ve never broken up with anybody before, the first chance I got a girl to actually like me, I dug my claws in and held on ever since (going on 22 years). I don’t know what that actually feels like, but I can tell you that in this instance – it felt fantastic.

I gained hours back into my week. Brain cells seemed to rebuild themselves in my head, even though that’s impossible. I found my smile again.

Okay, that’s going overboard just a little bit – but the most important thing is, I didn’t miss the show at all.

I went back to it one time to watch the episode where they deal with Finn’s (and real life Cory Monteith’s) death. They did a nice job with it, but I still didn’t care enough – or at all – about the show enough to go back. Glee ended a couple months back, and while part of me had a small interest in seeing the series finale, the rest of me bullied that small part into submission. Okay, actually I just forgot and never cared enough to go back.

I am using Glee as an example, but it is not the point of this post. Glee was a way to show that I can indeed leave a show behind.

I am writing this post because I think I’m ready to do it again.

I wouldn’t say that I am a huge comic book fan, but I am a comic book fan. I love reading really good comic stories, and I’ve always been a big Batman and in the last 10 years bigger Superman fan. I was also a fan of some of the big Marvel Comics characters. I liked the first Spider-Man movie. Loved Spider-Man 2. And well, I saw Spider-Man 3. They they started building the Marvel Cinematic Universe, I was pretty psyched about it – as much as a man in his 30s should be at least.

I’ve seen all the movies, but have only seen a handful of them in the theater (Thor, Incredible Hulk, both Avengers, and I guess Guardians counts too). Still, when I heard that Disney (because they own both Marvel and ABC) was putting a Marvel television show on ABC to coincide with the movies in some way, I thought it was a no-brainer. The movies would help promote the show and the show would help promote the movies (not that the movies needed the help).

I started watching from day one, and enjoyed the pilot episode. I wouldn’t say it was love at first site. I wouldn’t even say that I “like liked” it, but I definitely had a good enough time that I would see it again. Same time next week?

The relationship continued for weeks, but the initial interest from our first date together was wearing off. Sometimes I’d be late for our dates, and watch a few days later. Sometimes I’d let episodes pile up and fly through them all at once. It didn’t feel like binge watching. It felt a little like homework.

But there was always something to bring me back. A reference to the Avengers, an agent turning bad. Something would be there to spark my interest enough to continue the relationship.

We took the summer off as relationships like this often do, but got right back into the swing of things in the September. I was ready to start fresh and had a new positive outlook on the show. There were a lot of things I found interesting this past season, but (much like with Glee) somewhere along the way I started really not caring. I think a lot people really liked this season, but was it good? Was it bad? I am not even sure. I just know that I didn’t really care that much either way.

I saw that I had two episodes left in the show this season, and kept looking at it in my Hulu queue – oh wait, Hulu “Watchlist” – for eight days. It wasn’t until Wednesday that I decided to basically “get it over with.” It was at that time that I started thinking, “I don’t need to watch this anymore, do I?”

Let me be perfectly clear. I watched the entire first season of Marvel’s Agents of Shield and it wasn’t until that summer that I saw THOR and then many months later saw Captain America 2 on DVD. From what I remember, both of these movies had ties into the show. I remember the THOR tie-in with the clean up and there was other Asgardian stuff in the season. But I swear I have no idea what the tie-in was for Captain America. Maybe if I watched them both closer to their premiere it would’ve made sense to me?

This season, there was a tie-in with Avengers: Age of Ultron. Right? I mean, I think there was, wasn’t there? I saw Avengers 2 last week and watched Agents of Shield mostly on time – but I could not tell you what the tie-in was at all. And I realize why.

I don’t give a shit.

I’m not an idiot, so it can’t be that. Look, I’m not that bright, but I think I can comprehend things fairly well. I’m not saying the stuff Agents of Shield did was too complex, or that I couldn’t put two-and-two together. It’s that I just didn’t really care. I may have been checking my phone and Twitter during the show. I watched it and got the basic idea of what was going on this season. The big thing was this city that was in Coulson’s head, left over from some Aliens…An then there was an eyeless guy, a porcupine girl, and a bad actress who led them. 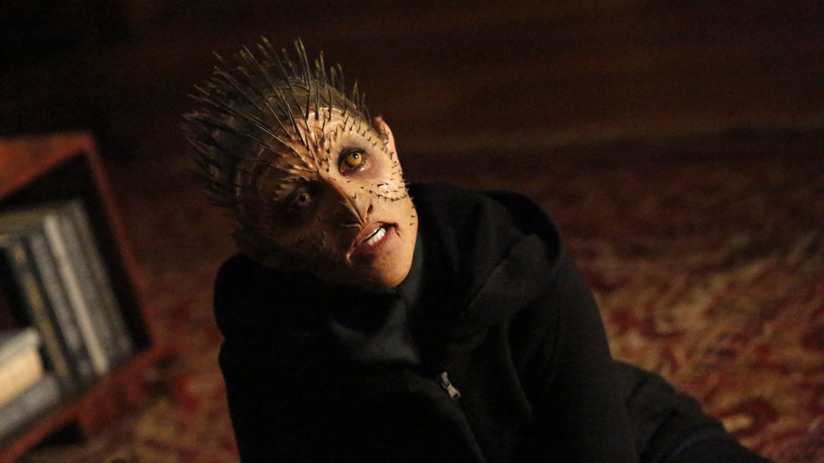 Then there was the Shield we knew from the Agents, and the “real” Shield where the girl from Friday Night Lights, a guy from NYPD Blue, and General Adama all worked. There was an agent 33 who could change faces, and Ward was a bad guy, but was he that bad? And a lot of Patton Oswalts.

I think that basically summed up this season for me, or at least what I got out of it. I watched it because it was part of the Marvel Universe, but I just didn’t care about it to pay enough attention to even know if it was really bad of it was just me.

Speaking of those tie-ins the movie? I could probably look it up online to see where the connections are, but I don’t have the desire to do so in anyway.

I think it’s just the nature of what this show is. It’s a show about the people who work around the Superheroes. But I want the Superheros.

I’m probably more of a DC guy. I thought Gotham was a pretty good show. Nothing great, but interesting enough to still keep me going – and the Penguin is great. And I love – as much as a 38 year old can love a CW show – both Arrow and The Flash. And Smallville is one of my all-time favorite shows.

But it’s not a DC vs. Marvel thing at all. I thought Daredevil on Netflix was a frigging masterpiece, and it shows that Marvel CAN do television good, and it actually made me think even more about how much I did not like Agents of Shield.

I like the shows revolving around the heroes (yes even Gotham does that to a degree) – not the people who work for the heroes.

Even with that last moment of the episode, where I thought “Hmm, that might be interesting,” I’ve decided that it was time to move on. 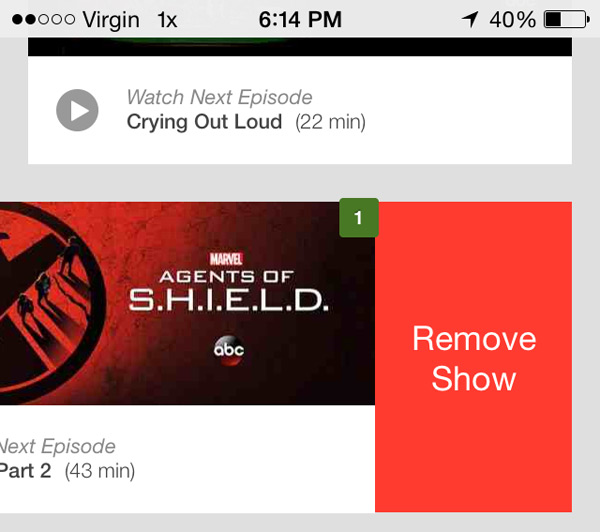 Let’s be honest though, you can never say never. There may be some great reason for me to return to this show in the future, but I just don’t see it happening. However, if it did – you can all refer to this paragraph as my cop-out.

But as far as today? This day? Right now?

Marvel’s Agents of Shield and I are officially broken up.